Yet another Hall of Shame for Indian journalism: Journalists 'force' man to commit suicide for 'footage' 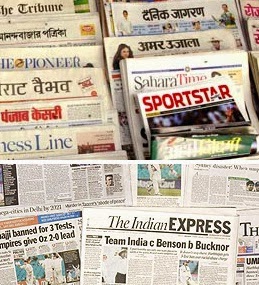 Shameful. A man died because of journalists who instigated him and made him take his own life.

The journalists (read cameramen) gave Manoj Mishra a matchbox and diesel, so that he could 'commit suicide'.

The plan was that he would attempt self-immolation so that they could get a 'good footage' of a man burning shown live and could be aired as sensational news.

Mishra got badly burnt and died. The police have now  registered a case of abetment for suicide against six journalists.

The FIR doesn't name anybody and naturally the mediamen would go scot-free. But isn't it shameful for journalists!

In its report, Reuters said, 'journalists helped him commit suicide in order to get dramatic footage'. Mishra, a delivery man, was upset over a large sum of money owed to him by a state-run dairy farm.

However, the journalists who wanted sensational footage so that they could get airtime handed him the matchbox and diesel. Worse was the conduct of the journalists after the incident.

As Mishra was badly burnt in process, none of the journos tried to save him and remained busy shooting him engulfed in flames. He was not taken to hospital. No one bothered to inform the police either. Mishra succumbed to burns on Independence Day.
Posted by editor at 8:38 AM

Really a sad state of affairs...That is why there is a need for someone to sit on top of these assholes to control them. And pray, Why no one is naming the names as to who these journalkists were ...from which channels ( I am presuming they were from electronic media)

sometimes, one wonders: should the government ban news channels instead of movie channels...

Good. Same news and views on this blog.. but they describes better

If you get a chance, check out my site: Pick 3 Turbo Player

This is something very dissapointing...is our proffesion much more importnt than humanity? they have no rite to take nybody's life..they deserve a worst punishment...

This is something very dissapointing...is our proffesion much more imprtnt thn humanity?? we have no rite to take nyone's life..these people deserves worst...

This is something very dissapointing...is our proffesion much more imprtnt thn humanity?? we have no rite to take nyone's life..these people deserves worst...