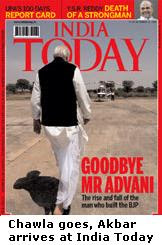 Seasoned journalist MJ Akbar was recently made the Editorial Director of the India Today group with former head Prabhu Chawla shifted to the position of Editor (Language editions).

Chawla, who is considered close to BJP and the Sangh Parivar, had a long innings with India Today. In this period the taste of Indian reader also changed. While circulation of newspapers grew despite the channel boom, the magazines failed to retain their readership.

India Today's circulation has also gone down significantly. Under Chawla, India Today somehow acquired reputation of a pro-RSS magazine unlike the pro-Congress or secularist Outlook edited by the veteran Vinod Mehta.

With The Week going up in popularity in recent times and Tehelka also furthering its base, competition was hotting up. The arrival of Open, which is priced higher, put further pressure. The quality of content wasn't improving and there was no innovation.

It was in this backdrop that Akbar was chosen by Aroon Purie to head the prestigious magazine. Akbar, who has successfully established institutions and launched publications like The Telegraph (newspaper), Covert (magazine) and The Sunday Guardian (weekly newspaper).

Though Akbar is more harsh on Congress for the last few years, his aggression is not considered ideological because of the quality of his writings. He has contested election on Congress ticket in the past but doesn't seem to have a good rapport with the current regime.

However, journalists like Akbar are needed as they take on establishment and write critical pieces on the ruling party and government. Now a days few editors write aggressively and even fewer are critical of the establishment.

One hopes that Akbar would be able to give a new direction to India Today. The management also appears keen on shedding the pro-RSS or BJP-friendly tag on the magazine. Akbar will also head the Headlines Today channel.

It was a known thing among journalistic circles that till now state bureaus and reporters of India Today gave a subtle pro-BJP line to their reports to pitch them, as they felt this brightened the chances of their stories for proper space in the magazine's issues.

Whether it goes from Right-wing to Centrist-Leftist-Antiestablishment mode is yet to be seen. But Akbar is certainly expected to revamp the magazine, which needs a change to survive and maintain its identity as the prime news weekly of the country.
Posted by editor at 2:34 PM

Let us hope that MJ Akbar will change image of India Today group.

Dear Akbar,
If Bharadwaj can give permission to prosecute Yedyurappa, why can't Her Excellency, Pratibha Patil, ( please tell me one pratibha that she has had, except that she has been a stooge of the you know who, but let that pass), give sanction to prosecute Sonia, now that it has been proved beyond all doubts that Quattrochi, vamoosed with the loot!

Sir,
How many more proofs you want? The PM has been lying to the nation.Yet, the English media continues to assert that his personal probity is beyond question; what a farce! He knew almost two years ago, what Raja was up to! Yet he did not do anything!
Now, he has stated this dubious argument, some double taxation agreement, whatever, for not revealing the looters of the nation!
Please make it the leader in your next issue.We, Indians want to know who are the looters and who have been aiding them to loot,that too so brazenly...

can't think of any thing which you may like, sorry but your blog is just about all lies and nothing else, i was a fan of india today group but lately they been realy bias and pro congress that even a kid can read or watch the tv channels and tell u that, damage has already been for over a decade india today group practiced their sick methods and they are going down as so the congress ... bon voyage