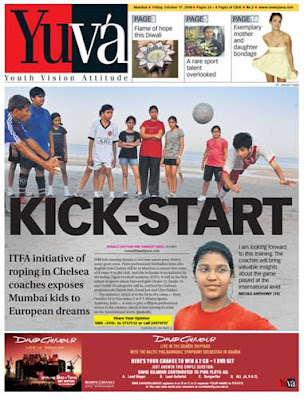 It's always sad to see a newspaper shut. Yuva, a newspaper that targeted the youths, has closed down. The sudden decision was taken just when the newspaper had completed one year of publication.

The English newspaper was owned by former Shiv Sena leader Narayan Rane, who is now with the Congress. The management had a recent realisation that there was no market left for youngsters who were more interested in internet, radio and TV than a fresh newspaper.

Shouldn't they have thought about it well? Perhaps, Rane wanted to use the paper to target the millions of youths and in some way use the paper for furthering his political ambitions. It's sad nonetheless to see the paper close as many journalists and other employees of the paper will have a tough time, searching for jobs.

So much for the protest about Jet Airways but did any channel or newspaper report this news and ask Rane about his version?
Posted by editor at 12:15 PM

Shukoor Ahmed ran for a seat in the Maryland House of Delegates in 1998, after coming to America a decade earlier from Hyderabad, India. Campaigning door-to-door, he was surprised so many voters did not know who represented them!

After his race ended slightly short of victory, he took advantage of his Master’s degree in Computer Technology and Political Science to build StateDemocracy.org, a website he launched in 2001 to connect citizens and lawmakers. His website’s motto encapsulated its mission:

The Hindu Yuva Vahini (HYV) is a Hindu youth group, founded by Yogi Adityanath, the leader of the Gorakhpur Mutt temple in Gorakhpur, India. The group has a high penetration among the largely unemployed youth of eastern Uttar Pradesh, where the collapse of the sugar industry and the closing down of a Fertilizer Corporation of India plant has led to increased unemployment in recent years.[1]

By organizing various movements such as ‘Ram Prakostha’ for pavement dwellers and the ‘Bansfod Hindu Manch’ for woodcutters, Adityanath has provided a sense of identity for many of these frustrated youth, who have swelled the ranks of the Hindu Yuva Vahini. The HYV has many Dalit members in addition to traditional caste Hindus, and the group is united by opposition to Islamic Fundamentalists who have a history of dominating the region and engaging in the persecution of Hindus, especially low-caste Dalits who were rarely accorded protection from Islamic persecution by the caste Hindus because of traditional casteist prejudices.

The Hindu Yuva Vahini has been implicated by Islamist sympathizers in the Mau riots of October 2005, where they organized the Hindu forces in opposition to the militant Islamist politician Mukhtar Ansari, the alleged murderer of BJP state legislature member Krishnanand Rai.[2] Charges of inciting riots, murder, and arson were brought against Hindu Yuva Vahini leaders Ajit Singh Chandel and Sujit Kumar Singh[3], along Ansari and some others in the opposite camp. Eventually, a curfew was imposed on Mau for nearly a month
Regards
http://www.india-forums.tv/