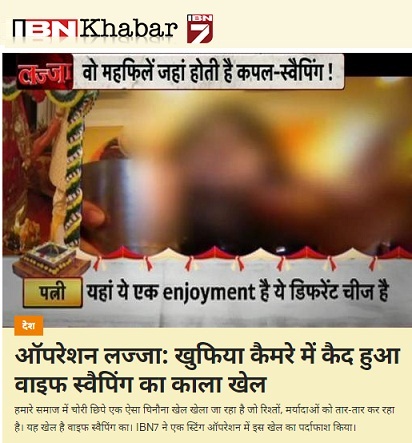 The channel has said that in most of these cases not just the husband but the wife also has her consent and sexual relations are established with other couples in front of each other, for thrill and heightened enjoyment.

Thus, nearly 7,000 couples or 14,000 persons are actively engaged in swapping partners for sexual relations, without any hitch or shame--a major change from Indian society where morality reigned supreme and sex was a taboo for ages.

A doctor couple--medical practitioner husband and his physiotherapist wife, told the undercover reporters, who hadn't revealed their identity and had shown interest in joining the 'couple swapping' as part of the sting operation.

How journalist(s) managed to track, meet such couples

The reporters on the story had find such couples, sent them own photographs posing as a newly married couple, and later met to fix and finalise the next move.

Indrajeet Rai, the report, worked on this story. After nearly two months of effort, finding email IDs of couples engaged in swapping partners, the 'journo(s)' managed to meet such couples.

Using WhatsApp, connections were established and photographs were exchanged. The 'reporter couple' also met another couple--an MNC officer and his college teacher wife. They also belonged to Delhi, NCR region.

The wife (physio) gave open invitation and said that the 'game' is perfectly fine and there will be no problem, if the new couple joins them. With hidden camera, entire conversation was shot and recorded by the journalists.

People from all sections of society getting into deviant sexual behaviour

From upper middle class to middle class, working women to housewife, people of all social strata are now into 'wife swapping'. Though it was believed that it was prevalent in India, the report shows that it has got acceptability among large sections of society.