For students of journalism, it can be a good example to see diametrically opposite views in Hindi press about the arrest of Pragya Thakur and her group for the Malegaon blasts.

Alok Mehta wrote a special editorial in Nai Dunia, the latest Hindi daily to have started publication from Delhi. He said that media had been soft on Hindutva groups and the firebrand Sadhus-Sadhvis. See the excerpt on the left. 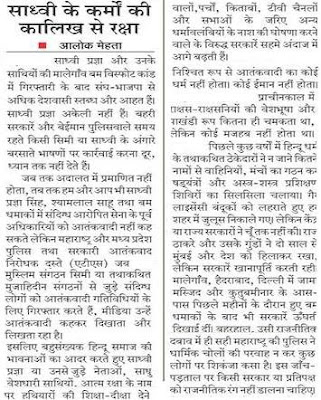 Jagran played up the news with sensational headlines. Dainik Bhaskar tried its best to keep the news hidden in a corner and published the photo of Sadhvi with BJP leaders, after other papers had printed it, and it became a necessity.

But some papers even went to the extent of defending her. One column in Rajasthan-based newspaper, Patrika, owned by the Kotharis, which is now published from Karnataka and West Bengal also, almost justified the actions of Sadhvi and made fun of the entire situation.

The columnist, Ajay Setia, wrote in his column 'Jantar Mantar' that suggested why it was important to find out why Hindus were turning towards terrorism. On one hand, he seemed excited at the growing ferocity of Hindutva forces and on the other hand mocked at the police claims by saying that he has also bought many second hand vehicles and can be framed easily for a crime.

It was not befitting a respected newspaper that is considered editorially driven and has a history of fair journalism to publish the irresponsibly written piece . The article was in a bad taste and the writer appeared not just prejudiced but also sympathetic to the perpetrators of blasts. 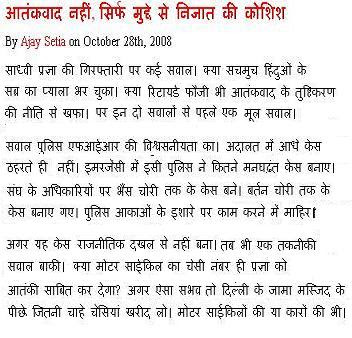 Now compare excerpts of this article to Alok Mehta's article. Isn't it striking to read both the newspapers. The first article is objective and in keeping with the ideals of journalism. The second is written by a journalist who has a narrow-minded perspective. For students of journalism, the lesson is that even if they have allegiance to a particular ideology or party, when they start writing it should be free of that ideological hangover.

Mehta's article is balanced and insightful. You read it and you think over it. You don't gather any ideological leaning in the paper. Setia's article in communal and provocative. You wonder if Rajasthan Patrika has become RSS Patrika. This is the difference.
Posted by editor at 3:34 PM

Media bias is a term used to describe a real or perceived bias of journalists and news producers within the mass media, in the selection of which events will be reported and how they are covered. The term "media bias" usually refers to a pervasive or widespread bias contravening the standards of journalism, rather than the perspective of an individual journalist or article.The direction and degree of media bias in various countries is widely disputed, although its causes are both practical and theoretical.

Practical limitations to media neutrality include the inability of journalists to report all available stories and facts, and the requirement that selected facts be linked into a coherent narrative (Newton 1989). Since it is impossible to report everything, some selectivity is inevitable. Government influence, including overt and covert censorship, biases the media in some countries. Market forces that can result in a biased presentation include the ownership of the news source, the selection of staff, the preferences of an intended audience, pressure from advertisers, or reduced funding due to lower ratings or governmental funding cuts. Political affiliations arise from ideological positions of media owners and journalists. The space or air time available for reports, as well as deadlines needing to be met, can lead to incomplete and apparently biased stories.
REgards
http://www.india-forums.tv/

Moola Ram is an anti social element (Tantric, Magician, and Maulvi) who can do anything wrong in the country. He and his family (wife) is continuously threatening me and people nearby my house and asking for lakhs of rupees. The concern has already been reported to the Delhi Police, but nothing is happening from their side. If you want that these kinds of people should not persist any more inside and outside the country who can hamper peoples of India, I would request to file a complaint against them. He is working in Rajasthan Police Force. He is operating from the Rajasthan Police force camp in Gazipur (East Delhi, India). Kindly help people of India. They have links with many other anti social elements who are uniformly hampering the entire country. They have murdered many people because of this.
Regards.