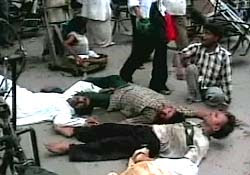 There are no words to describe the level to which mediamen have sunk.

The report that journalists had asked physically challenged persons to attempt suicide by consuming poison, in order to get attention, has come as a shock to entire journalist fraternity.

The disabled persons were protesting the decision of local administration, which had removed their kiosks.

Apparently the camera persons, photographers and journalists urged them to consume poisonous substance so that it could become a national news and in turn force the administration to reverse its decision.

The media persons were, in fact, getting a news for themselves only. The protesters were told that the particular medicine will only make them unconscious for some duration and they will gain consciousness later.

However, five persons never woke up after they consumed the tablets. All this happened in full public view at a busy square, with nobody trying to take the persons who were tossing and turning due to the pain, to hospital.

Of course, the police ought to have acted fast and taken these persons to hospital but journalists can't escape the blame.

Journos had asked woman to strip to get attention

Earlier, in Rajkot, the woman (Pooja Chauhan) who had come on the street, naked, was also coaxed by the journalists to go about a unique form of protest.

Later, reports suggested that the media men had asked her to strip and move aroud in her lingerie. She was told that her tale of harassment by her husband and in-laws would be shown on television channels only if she went out in such a semi-naked state.