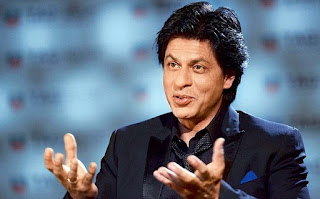 It was really bad to hear. A journalist was interviewing Shahrukh Khan on NDTV and was obsequiously asking questions.

For example a question was,. 'So you wear only branded shirts...', and then the next question posed was about the actor's grotesque shoes.

The superstar admitted that they were odd but special.

Shahrukh further said that these shoes were special because if he put them up for auction so much money could be raised that it would meet the expenses of running your (journalist's) channel for an entire year.

Imagine, this was telecast on the channel. Why are these people mad about actors and treat everybody as a demigod. This happened sometime back, more than a month ago.

The other day a reporter got so excited with Dilip Kumar that the legendary actor had to say 'Aap itna chilla kyon rahi hain' (Why are you guys, shouting?)
Posted by editor at 9:45 AM

well...i dont now wht happen to today's reporters thy ask ecentric questions...one reporter ask tanusheree dutta how many kiss u gt to do in u lates movie....wht the hell thy r doing man...
visit my blog:- www.lifehai.blogspot.com