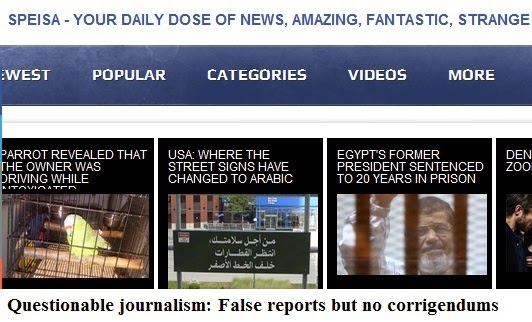 Journalism has been in crisis and the credibility of journalists is increasingly under scanner because of the bad apples.

It invests in advertising to push its content up on social networking sites too.  In the online world, it is the hits that count.

Recently, the website came up with a report that grand mufti of Saudi Arabia has issued a fatwa as per which a man can eat his wife in extreme condition.

The story created a stir. Soon, the flabbergasted clergy also issued a denial. But the damage had been done to a large extent. That was not the first such story by Speisa.com that has been wrong. It keeps coming up with similar reports, especially, about Middle East.

Then there are no apologies either for publishing fake content. Isn't it serious? The more 'eyeballs' or more hits, the more is earning through advertisements. Hence, bizarre stories are being projected by news websites these days. Forget hard stories, now sensational stories are being promoted so that people are tempted to click even if there is no substance.

Of late, many new groups have entered 'media' though they have no past association with journalism or journalistic practices. This is affecting journalism over all, and the credibility of journalists is also under serious threat because of such malpractices.
Posted by editor at 7:09 AM