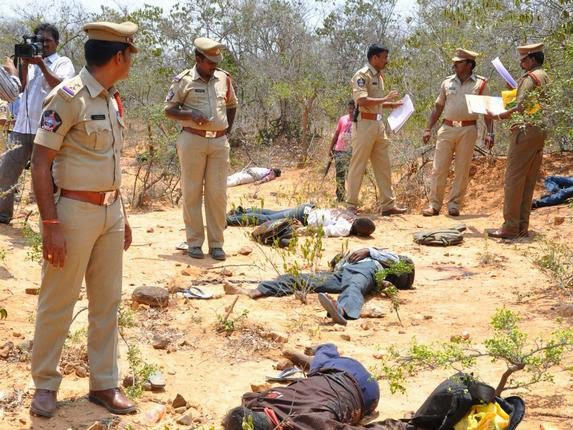 When 20 persons were killed in an 'encounter' in Chittoor, it didn't create a flutter in national media.

The Tamil Nadu police said they were 'smugglers' and their version was immediately accepted.

Media didn't raise a single question that if they were hard-core criminals, how all the 20 people were killed on the spot, without injury to policemen.

They were termed as 'Red sanders'. Even if they would be suspects of smuggling, this sort of MASSACRE isn't justified. It didn't seem 'encounter' from any angle. The clothes on the victims' bodies, shows that they were poor people, possibly wood cutters.

This is the treatment our police give to wood cutters. Are we becoming a police state where courts don't matter at all? 'Suspects' are killed in cold-blood, 'under-trial prisoners' are killed even before there is a verdict.

TV channels didn't bother much as the victims were POOR. No TRP!!!. Channels who show live reports over nonsensical and trivial issues, had no interest, there was no anger or special programmes to raise the issue of such injustice.

The same was the attitude of the media in the encounter of suspected SIMI operatives, Viqar and four others, near Warangal in Telangana. The initial reports were about police versions. Later, photographs emerged that the persons killed were all handcuffed.

But, there is no interest in our media, to question the police version. There is a serious concern towards the way journalism is heading in this country. Society, the influential upper and vocal middle class, has developed certain 'values'.

The values indicate that anything the police and army does is not questioned. This is a dangerous phenomenon. So there is hardy any effort to look at the other side of the picture, these days. It seems 'unpatriotic' to them, perhaps!

The attitude of Indian media towards police excesses is a serious issue. Media is supposed to be the 'conscience keeper' of the country, but it has gone astray, big way, in India. This is really very, very serious and senior journalists must do introspection.
Posted by editor at 2:30 PM