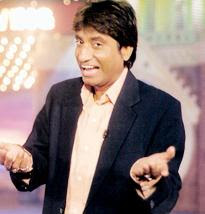 After Crime Capsules and the Horror Special shows became a daily feature on news channels, the comedians have also got a new avenue with 'buffoonery shows' becoming a regular at all channels.

Ajtak, Star, Zee and Sony have all started daily comedy shows. Raju Srivastava, the reigning king of mimicry and comedy, is featured, not once but thrice during 24 hrs on Aaj Tak.

It all started when Shekhar Suman's show started on Star TV a few years back. Poll Khol was a success, there was no doubt about that, as it exposed politicians.

Now we have got Aisi ki Taisi. First it was Rakhi Sawant who came with her and the duo took buffoonery to a new level. Even a Rakhi Sawant's duplicate is now here to keep people hooked.

Cricket, Bollywood, Horror and Ghost, Crime, Comedy, Soap Operas. But where is news?
Posted by editor at 3:05 PM

Aisi ki taisi rocks, very smart show, good sense of humour, for all those who don't understand comedy, yall can fuk off

We are interested in humor in East India, we think a partnership with a US-based comedy site like ours could really be funny!! And with the talent of Aisi ki taisi, it is sure to be a WIN-WIN!