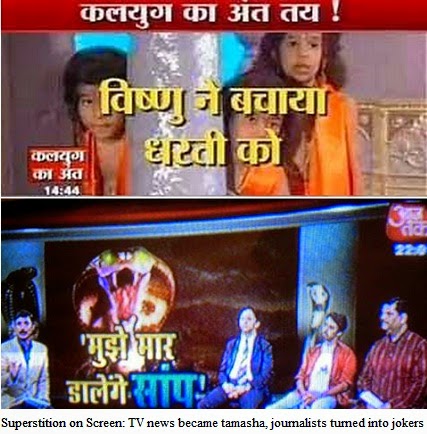 Many are wondering how Rajat Sharma could be awarded Padma Bhushan?

This post is about the fall in standard of TV news and journalism in India.

While Arnab Goswami is accused of killing English TV news [as Outlook claims], who is responsible for the death of Hindi TV news?

This question has been raised by Senior journalist Dilip C Mandal who has written a series of Facebook posts on it.

Mandal, who was managing editor, India Today (Hindi) till recently, names three journalists for their role in bringing down credibility of Hindi news channels.

Under whose leadership did the Hindi TV channels enter the 'circus mode'? In prime time, instead of news, TV channels began showing stories about naag-nagin (snake) superstitions, call girl who charged the most and about cars moving without driver.

This journey continued to such an extent that everybody kept slipping, even falling into gutter, and no one bothered.The three leaders who are responsible for turning Hindi media into Peepli Live and its journalists into jokers are Uday Shankar, Qamar Waheed Naqvi and Rajat Sharma.

I will write a detailed paper on it, sometime later. I have no personal issues with any of them. But they are responsible for the situation that today there are jokes on media. Talk about reporters and kids start laughing.

These channels got audiences addicted to such humour that ultimately TV News channels began showing half-hour laughter challenge shows. If this trio won't be there, may be other leaders would be around, doing the same. But they were leading the three major channels in the era.

There was a time when Ganesha idols were sipping milk but SP Singh countered superstition on TV and used the cobbler's tool and showed that it could also sip milk in the same way, and also demonstrated how TRP can be generated by going against superstition.

There is tamasha in Indian English news too but that is mostly around news. In Hindi news channels, tamasha is foremost and there is no need for news at all. Uday Shankar, Qamar Waheed Naqvi and Rajat Sharma drove Hindi TV news to the superstitious age, even though all of these three persons are modren people. However, news was brought the lowest common denominator.