Fortunately it was an Ashram, not a Madarsa: Media 'softness' on Sant Rampal, his guards' fight against State 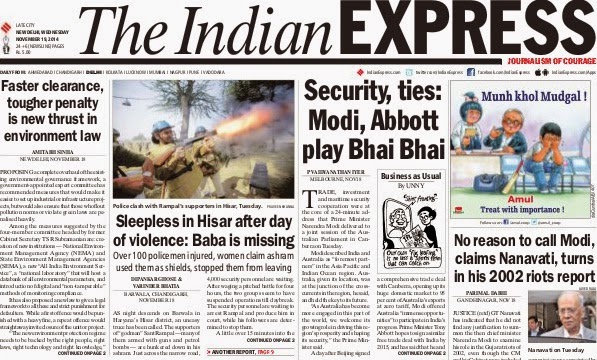 A self-styled Godman's private security guards who are ready to fight the State government and its police, stopping them to enter the Ashram, by firing and throwing petrol bombs on them.

What could be more sensational for Indian media? Did it ever happen before? The scale of violence and the resistance towards police was simply mind-boggling.

It was surprising that the Ashram's guards were motivated enough to fight the police. Gunshots were being fired from within the Ashram at the policemen. This lasted for over a day.

The 'gunmen' or 'private army' was fighting the State. It can be termed treason or pure foolhardiness. But there were thousands of people including women and children inside the Hisar Ashram, during the operation.

Finally, six persons including a child died during the siege--either due to illness or possible injuries during the violence. Just think, when you had witnessed such a scene in independent India, before? An open defiance against the State, leading to an operation in which six people died, what's that?

Imagine, if it was not an Ashram, but a Madarsa. What'd have happened then? Wouldn't the media have begun speculating immediately about 'radical ideology', 'links', 'modules', taking names of obscure organisations & opining about 'jehadis infiltration' in the community?

In fact, any other act of much lesser magnitude in urban India, would have immediately drawn national attention. TV channels would have gone ballistic, with their vocabulary. Self-styled security experts would have gathered on talk shows, talking about threat to nation.

In fact, there would have been immediate call to send NIA-ATS squads and storming the place by taking the personnel through helicopters. Cases under the draconian laws would have been slapped, immediately. Have they used UAPA in this case, yet!

No newspaper or TV channel even bothers to talk about it. Thank God, it wasn't a madarsa. In fact, ,omds have been modulated to such an extent that a law-and-order problem that should be dealt with promptly, is handled differently depending on these factors.

Just recall the figure of those injured: over 100 policemen suffered injuries in the attack by Ashram's men. In a country, where a gunshot fired on a security personnel, is enough to cause ripples, this incident--though getting media coverage, didn't cause much alarm.

Journalists were injured when police allegedly targeted them. But one must say that the police didn't act irresponsibly at all. In fact, it was far far cautious, when one looks at the police role in similar situations otherwise.

After injury to policemen, they generally use more force. But here, even facing bullets and petrol bombs, police didn't fire recklessly, and instead used water cannons. There were announcements and appeals to the 'Baba'. Otherwise, ordinary protesters or those pelting stones get shot in other places.

The use of force and the magnitude of media coverage are different. The operation in Hisar, has left lot of questions unanswered. In fact, it also tells a lot about inaction of the local police and intelligence.

Were intelligence agencies were not aware that the Ashram had such committed guards, who can go against the state? Or, if they were aware, why action was not taken earlier? The tragedy, especially, the deaths could have been avoided.

Also, when there was court summon and it was known that 'Saint' Rampal was gathering supporters to use as 'human shield', no intervention was made earlier. It'd have been easy to nab him then. But thousands were allowed to gather inside the huge Ashram, which finally led to the violent showdown.

Finally it's good that Rampal is arrested and will now face the law. He is behind the bars and may be convicted. Time for media persons to introspect. Also, for the state. The fact is that all law-and-order situations should be dealt with firmly (and promptly) and with similar response, without any prejudices.
Posted by editor at 12:36 PM