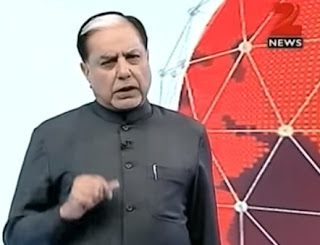 Under fire for allegedly airing doctored videos during the JNU row, Zee News owner came on his TV channel to clarify his stand.

That police case may be registered against the channel owner or editor(s) for airing the videos may have forced them to go public.

Chandra said that some people were branding Zee News as 'BJP's channel', which was a wrong perception.

"We are neither Congress' channel, nor BJP's channel. The truth is that we are against fundamentalism of all kind". "We are pro-India", he said.

Chandra said that Zee was being defamed and he was being sent harsh, abusive messages on Twitter.

He went on to name controversial Zee News anchor Sudhir Chaudhary, who was arrested and jailed for allegedly demanding bribe from Jindal group, as a his companion who was also getting similar such messages.

Chandra though claimed that he had grilled a BJP leader too recently and had exposed the party on various issues, he praised Anupam Kher in the same breath. Clearly, Chandra was forced to speak as his channel is accused of airing doctored videos.

Watch Subhash Chandra's video on Youtube
Posted by editor at 11:58 AM