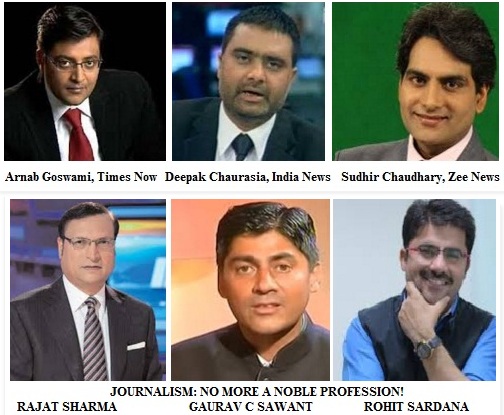 Indian TV news is in a state of serious crisis.

Creating false stories, manufacturing rage and tarnishing image of particular people or groups at the behest of powerful lobbies has become the norm.

In process, journalism is the biggest casualty. Ethics be damned, morality thrown off the window. The anchors sit on a pulpit and say who is 'deshbhakt' (patriot) and who is 'deshdrohi' (anti-national).

Arnab Goswami conveniently ignores what happens on the streets and selectively shows what suits him and his political line, calls guests of his choice in the show and doesn't let any alternative opinion come up in the show.

When journalists were being beaten up in the court in Delhi for consecutive days, he wasn't bothered and kept whipping up sentiments over 'nationalism' by taking up a clearly one-sided position. Goswami even has the cheek to talk condescendingly about journalists who took out protest rally.

Sudhir Chaudhary is the face of Zee News. He has faced criminal charges in the case of alleged bribe from Jindal group and had to go to Tihar jail over the allegations. Chaudhary was earlier with Live India channel, which was shutdown briefly when a fake sting-op was aired about a Delhi teacher.

Now Chaudhary runs the channel as mouth piece of the BJP government. It takes a pro-Sangh policy and targets any opposing voice as 'traiter' and 'anti-national'. The channel has perfected the art to twist issues and divert viewers' attention from real issues.

Deepak Chaurasia's channel India News went a step ahead during the ongoing JNU row. The 'video' was shown in which students were raising slogans 'Azadi' but words like 'gharibi se' were suppressed to give the impression that they were talking about Kashmir's freedom.

These are not alone. Anchors and journalists who show you biased news and inflame passions are dime a dozen in Indian media, now.

This is 'supari journalism', as people are targeted because of ideological considerations.

Take for instance, Gaurav Sawant, a right-wing zealot who works as journalist with TV Today. He is known for his clear pro-BJP tilt and goes to the extent of creating fake stories and giving twists to bring communal angle to stories.Zee News' Rohit Sardana is another 'jingoist journalist'.

India TV's Rajat Sharma is a seasoned anchor and though his style is somewhat different, his agenda is also well-known.  He has got Padma award recently.
Posted by editor at 11:59 PM