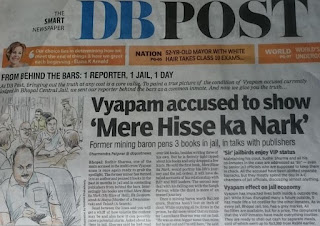 Dainik Bhaskar group that runs the second biggest Hindi newspaper in the country has launched an English daily.

After many years, this is the third attempt of the Hindi media group at launching an English paper.

It had a paper, The Bhaskar daily, in English. Later it was re-launched and named National Mail. The paper was closed in 2000.

But now the group has launched its third English paper DB Post. The paper is said to be brainchild of Bhaskar group MD Sudhir Agarwal's wife Jyoti Agarwal.

The launch was subdued. It hasn't created a stir in journalist circles so far. We tried to find but there has been no website or online presence of the newly launched paper. This is surprising as print is accompanied by web these days, even in small publications.

UPDATE: A year later, why DB Post failed to make a mark in Bhopal?

There is no internet presence in the form of Facebook page or Twitter handle. We have found that many journalists have also quit the paper within days of its launch. The reason is that editors with Hindi background were posted and this caused bickering and resentment in editorial.

Some reporters from Dainik Bhaskar have been inducted who write the copy in Hindi and later it is translated. But Dainik Bhaskar is known for its strong marketing tactics. It has to be seen how the paper works and if the group manages to push it aggressively and sell the paper.