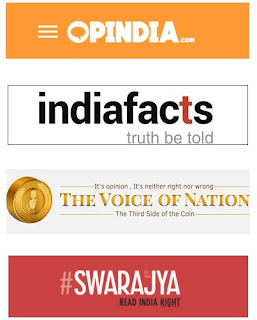 Just like many news sources, papers and publications are pro-Left or Centrist, there are newspapers and magazines that are pro-Right too.

But, there has been a new phenomenon in Indian media--of hardcore right-wing websites that are not just aimed at furthering the political ideology but can go to any length in misrepresenting facts, even if it entails demonising the 'opponents'.

Just see how 'The Voice of Nation' claimed that Amitabh Bachchan was Jawaharlal Nehru's son. Such propaganda, disguised as journalism, is affecting image of Right-wing media.

These websites give sharp twist to stories, just in order to take forward the Saffron narrative. In process, facts are often ignored or manipulated and one-sided stories are carried.

They provide news differently, so different that they can cloud your vision and even confuse you about any issue. This is extremist right-wing journalism, if we really can it journalism. Media shouldn't manipulate facts and take sides to such extent.

This is doing damage to a healthy right-wing narrative because of the negativity and the zealous nature of these pro-Hindutva media projects that refuses to look at any other side of the picture. It seems that they are aimed just at running defamation campaigns against individuals and groups who are not in sync with their ideology.

Sorry, you may try as hard as you can but you just can't brainwash people. Shouldn't there be a decent and honourable right-wing narrative? Unfortunately, these websites are pursuing Hindutva agenda with such bias that they are affecting the image of the proper right-wing media.

1. Indiafacts is a website that gives the impression that it talks about 'facts'. But it often presents wrong, distorted facts and the commentary is biased. For the gullible reader, it is 'India facts', but the truth is that it is 'India fictions', not 'facts'.

2. 'The Voice of Nation', it seems, can go to any extent in misrepresenting facts. It spreads blatant lies and publishes unconfirmed facts. It is not journalism, at all. Ethics be damned, this seems to be the motto of this website. It even claims that Amitabh Bachchan was Jawaharlal Nehru's son.

3. OpIndia.com is not as reckless as Voice of Nation but pushes right-wing agenda strongly and intelligently. It goes for 'hit-job'. For example, it targets not just opposing politicians but also intellectuals and journalists who are critical of BJP-RSS. By raising petty issues and amplifying them, it provides 'ammunition' to Hindutva cyber brigade that would then target the 'opponents' on Twitter, Facebook and other platforms, citing these links and stories.

4. Swarajya magazine would appear better when compared to the above-mentioned sites. But the online magazine is also clear in its approach. For it too, journalism is fair only when it suits the Right-wing. Facts are presented selectively to support BJP and attack others.
Posted by editor at 12:46 AM