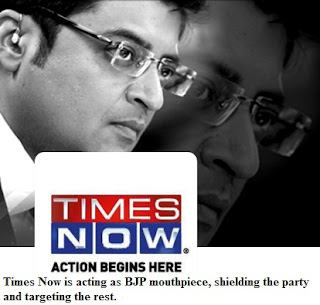 English news channel Times Now has taken a complete turn towards 'right', and has in fact gone to the extent of becoming a BJP mouthpiece.

The channel under Arnab Goswami was always known to have a pro-BJP tilt but ever since Modi government came to power, it has stopped its 'aggressive journalism'.

But when you can't attack the government, who will you shout at? In order to keep the tempo and maintain its TRP, it is now creating villains and targeting them.

The hashtag '#StopAntiIndiaCampaign' is just an example. By terming JNU and its students as 'anti-national', the TV channel is inflaming passions under the garb of its 'nationalistic journalism'.

While Kanhaiya Kumar didn't shout any slogan, he was arrested and booked for sedition. But the same channel remains soft on BJP, RSS and ABVP leaders who have been found involved in anti-national activities, rioting and extremist acts.

Arnab Goswami conveniently ignores right-wing group burning national flag or BJP allies like Akali Dal and PDP trying to save, release convicted terrorists. After, the prime task is to save the BJP and protect it, when it is failing on various fronts.

By diverting attention, creating new issues and inflaming passions, Times Now is cleverly acting as BJP-RSS' agent in the media. It is not alone. Zee News, India TV and many other channels are also doing exactly the same.

The casualty is journalism. Morality and ethics have been abandoned. The sole aim is to act for the Saffron groups. That's 'supari journalism' at its best. History won't be kind to Arnab Goswami and Times Now for shaming the noble profession.