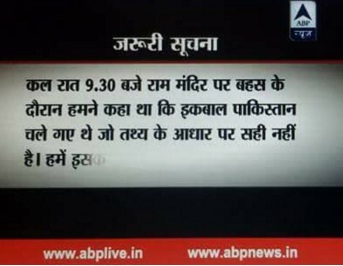 One of the prominent Hindi TV channels of the country, ABP News, said that poet Iqbal had migrated to Pakistan.

Iqbal was born in undivided India and died in 1938. He had died nine years before partition.

And, there is no question of Iqbal leaving his country or even region. The bloomer caught the attention of large number of viewers.

Later, anchor Abhisar Sharma, expressed regret, about the mistake. However, even the mistake has not been acknowledged properly.

The channel mentioned that, 'During debate we said that Iqbal had left India to go to Pakistan, which is factually not correct....'.

But, before expressing regret, Abhisar Sharma said, "What we said had symbolic meaning. Iqbal is now a symbol of Pakistan. Still, if someone is hurt, we express regret". 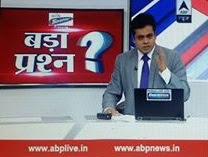 Senior journalist Pankaj Srivastava has come down heavily on the channel for the irresponsible 'anchoring'.

"Iqbal was not anticipating a separate country.. Abhisar should have made an effort to find out the reality...he should think how his brain got the 'sanket' (signals) about Iqbal and this get transmitteds through a political radio station. This is not a coincidence'
Posted by editor at 1:06 AM