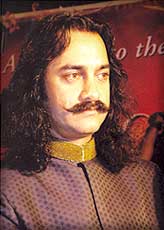 Bollywood star Amir Khan's interview in Tehelka is being discussed because of his straightforward answers and strong criticism of the media.

The sight of Khan's men mistreating journalists at his marriage was still fresh in my mind and at first glance I though he was acting smart.

Though I believe journos should not try to intrude private parties without invitation. But then I read the interview today. He has raised serious questions.

I must amid that the interview is interesting, eye-opening and shows mirror to the TV channels and newspapers.

Media ought to be a watchdog not a lap dog, he says and cites glaring errors of newspapers.

Amir Khan charged Times of India with publishing wrong stories, HT with printing false news of his marriage twice, Channel 7 of airing his conversation without talking to him (it was someone else's voice, says Amir) etc etc.

The interview with Shoma Chaudhury is spread on three pages. Amir says that he reads just The Hindu, Indian Express and watches only DD for news.

On the investigative prowess of journalists who do stings like sex life of an actor, Amir has spoken a lot. Particularly, the shooting of militants soon after any terrorist attack.

"I realise that somehow authorities very conveniently find one or two people within hours or days of the attack (like Varanasi blasts) and kill them in shootout.What I want to know is why can't they do that before. Is it so easy to find a criminal?

If it is so easy why can't we nab them before the act? And in this, I want to comment on the role of media, where they conveniently take it on face value and say phalana dhimka from phalana dhimka group has in fact done this.

We know that somebody has been killed. We can see the dead body there, but we don't know who he is. No body knows who planted a bomb in the temple.

Today a temple, tomorrow it can be a mosque or market. The job of authorities is to find out those behind the act and the job of press is to investigate whether the authorities are telling the truth".
Posted by editor at 10:30 AM

When Aamir says he reads only Hindu and watches only DD we have the proclivity to take a critical note of other media.
But let me ask you what stories does Hindu print? Hindu hardly breaks any news. I am not putting on pedestal newspapers that do anything to break a news and also to break the neck of news broken by other papers'.
What ever he says shouldnot be lapped up as verities.
Every paper has its own strong points.
TOI covers civic issues vigorously than anyother paper,but it doesn't mean that it is one hallowed paper.
If said in a jocular vein, it is dialetical materialsim the newspapers are doing by printing what has not happened.
So that it invokes responses from the injured party leading to other important points.
And what does DD do. i don't find words to desribe it.
If it was not or this sensation- craved media we wouldn't be living in this informed world.
Am I being boring hope not.

Rarely only do Hindu publish stories that are critical of anything, like the analytical pieces written by Neena vyas about Hindutva.

I can't agree more. Yes, I find Hindu too boring. And of course it doesn't break stories.

If he reads on Hindu (the communist mouth piece) and watches only DD (YAAAAAWWWWN)...then how does he know that TOI published wrong stroies or that HT printed false news ?!

All of us, like Aamir have views on various subjects in life. His comes in limelight & so requires caution. People also connect his other views and actions and judge him in an overall perspective. Consider his views on American attack in Iraq. He saw it as Muslims being targeted by western governments. Did he have his views then on the destruction of Bamiyan Buddhist statues, the Indian Airlines hijacking or the internal killings of the Muslims. He generalised his views on terrorism in J&K by saying his heart bleeds. Can he be brave enough to say anything specific against the Indian or Pakistani government or name the terrorist leaders to say some thing against them? Does he remember Salman Rushdi’s original face? What does he have to say when world over including Indian Muslim shopkeepers withdrew Coke and Pepsi products from the shops, thus driving hundreds of Indians out of job.
Government/Law courts have double standards in many issues. In Mumbai when an unauthorised footpath encroacher is evicted he is given a pucca house in the same locality, while a law abiding citizen who say, works in south Mumbai has to shift to far north for getting a bigger space.
A farmer is evicted when a dam is built, and he also gets ‘evicted’ when his well runs dry. The Coke could not put up plants in Kerala because Keralites were assertive of this fact. But in other places in India farmers had to give up their land because plants like Coke sucked all their ground water. AAMIR EARNS MONEY FROM THESE COMPANIES.
What coincidence in the similarity of the timing & platform of his Gulf War opposition and Narmada Andolan support -to get maximum publicity rather than the actual cause. His double standards speak out here. He does not have to apologise to Gujarat but to the whole Nation for hogging away so much of time. Mr. Khan you are an excellent actor and we wish to see more of that than any other role that you want to invest in.