Journalists for the Elite: Indian Express' crisis & 'Is drug use not a crime for rich!' 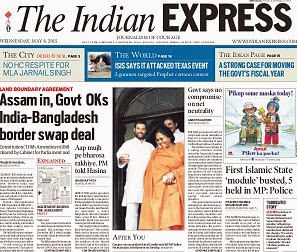 Reading the Indian Express story 'Pune's morality police ranting over a rave', one wondered what the paper actually wanted to say.

The dilemma probably was that whether upwardly mobile, rich youth, many of whom were BPO employees [the greatest symbol of India shining] could be blamed for drug use.

The story (Or shall I call it editorial) on front page of Express, tries its best to blame the police for the raid and almost puts the Additional SP in the dock for 'daring to spoil the party'.

Soft on the rich, influential

Were they not having just some little fun! The whole story is written from the point that police wanted publicity and unnecessary brought bad image to Pune.

Isn't it in keeping with the line that when the 'sons or daughters of the famous and rich and well-connected' do an offence, it is just a 'minor slip'?

The fact is that all these youths were doing a crime, a heinous crime, an offence punishable. Poor youths are caught and face the law for minor delinquencies but when the BPO employees get caught, the magnitude of their crime is watered down and they are made to look like as victims.

Just like Fardeen Khan, whose father's infamous comment 'Boys do it' when his son was caught for the same offence. SP MP Abu Asim Azmi's son had also escaped the law when caught with drugs in Gulf. And Rahul Mahajan's case is recent example in the case.

Nobody says that they should get excessive punishment but they should not get any reprieve. These are educated youths and they must be made to submit to the law of the land.

'Show me the man and I will show you the Rule', this must not be allowed to happen in this country. And if media becomes a tool in this, it is surely criminal.

Unfortunately, Express is not alone in this kind of journalism. Even channels that were quite excited initially later looked soft on these youngsters and sympathetic towards them in discussions. On Times Now, it was quite evident as the anchor didn't grill the lady who was fiercely backing the delinquent youths.

The Indian Express story can be read here.
Posted by editor at 11:17 AM