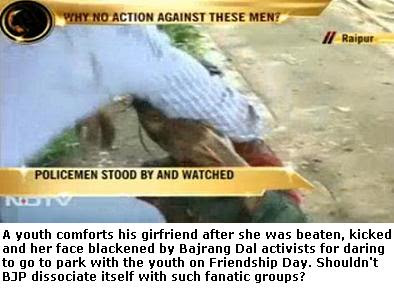 BJP leaders are miffed with the use of the term 'Saffron terrorism' by Home Minister P Chidambaram during the annual meeting of police chiefs. The party raised a hue and cry in parliament and demanded apology.

The uneasiness of the party is quite understandable. But it must enlighten us whether it considers Saffron as the colour of Hinduism? Or it can suggest another term to cover such terrorist acts.

Would BJP be comfortable with 'Hindutva-inspired terrorism' or 'Right-wing terrorism'? Now senior party leaders scream that terrorism can't be linked to any religion. But did they oppose the use of the term Islamic terrorism in the past? Its leaders used to make fiery speeches about Muslim terrorism (aatankvad).

Even today when media screams 'Sikh terrorism returning to Punjab', does the BJP object?'. In fact, there should be the same parameter while talking about all acts of terrorism. The BJP is beset with ideological confusion as it is part of the Sangh Parivar that has organisations including renegade militant cadre.

Terrorism is not just planting bombs which Abhinav Bharat or SIMI have been accused of doing in the past. Can the society forget Dara Singh who had burnt to death innocent children of Graham Steins in Orissa and a senior BJP MP had even launched a movement to free him.

Babu Bajrangi's role in Gujarat is equally worse. Similar is Pramod Mutalik whose Ram Sene organisation is known for beating women and dragging them by hair or even engineering riots. All these are acts of terrorism that should be dealt with an iron-hand.

When a few weeks back, self-styled Hindu groups, Bajrang Dal, VHP and Shiv Sena goons were publicly kicking girls who had dared to sit in park with their boyfriends on Friendship Day and had blackened their faces, even tearing clothes, didn't it hurt the sentiments then?

Ever since we remember, BJP's off-shoots have been going on rampage and attacking women on Valentine's Day and similar occasions. The mass terror caused by MNS drive against people from UP and Bihar, had even seen deaths in Maharashtra. 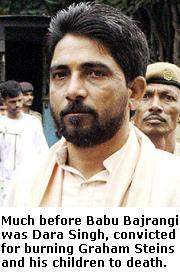 Why BJP doesn't dissociate itself with them? The irony is that the party is caught in a bind. It has the same root cadre as groups like Abhinav Bharat and Sanatan Sanstha because of RSS links. It has to defend and even safeguard such elements wherever the party is in power.

On a lighter note, Saffron is most commonly grown in Kashmir, a Muslim-majority state, with which the BJP has a strange political relationship. Saffron is also the colour of many Muslim Sufi saints who wear kesariya or geruwa robe.
The Congress should also avoid playing politics. First, Chidambaram speaks about the threat from Saffron terrorism and then the party general secretary Janardhan Dwivedi disapproves of the statement.

It would however be prudent that no prefixes are used along with the word terrorism. It should remain plain and simple, Terrorism, whether the perpetrators are the Islamists, the Hindutva-wadis or the Naxals. All of them should be condemned in the same breath.
Posted by editor at 11:33 PM

Wow all I can say is that you are a great writer! Where can I contact you if I want to hire you?

You can write to me write2 editor@gmail.com