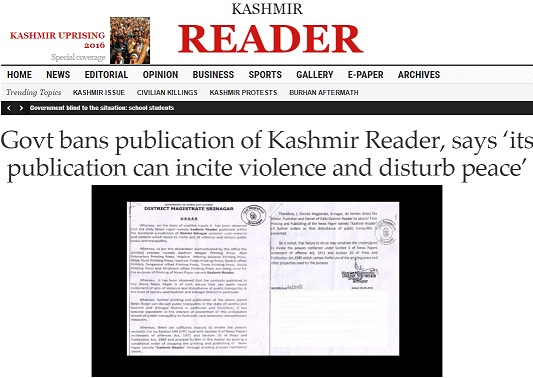 It's bad news for media. A newspaper has been forced to stop publication in the world's biggest democracy.

The management of the Kashmir Reader was asked to stop printing.

The administration issued an order, which forced the paper to shutdown its operations.

Worse, media is largely silent. Journalists across the country haven't stood in solidarity with the newspaper.

The newspaper has been banned. The decision has been unprecedented. But it has not lead to any outrage. There have been voices condemning the 'arbitrary decision' and demands have been raised to withdraw the ban.

However, most big media houses avoided to cover the story. The closure of a newspaper is not something that can be ignored. It's an emergency situation. The order came when situation in Kashmir had improved relatively.

Quint carried this piece, 'Is Ban on ‘Kashmir Reader’ Daily An Instance of State Repression?'. It quotes the editor Hilal Mir, who says, "The order is vague. It does not mention any article or content that they have found objectionable".

"If there is misrepresentation, specify it, take legal recourse instead of arbitrary methods", he further says. Media watchdog The Hoot has also carried a report, 'A quiet day at Kashmir Reader'. Unfortunately, other media houses ignored the news.

For them, it was not big news, perhaps. And herein lies the tragedy of our times.
Posted by editor at 1:06 PM