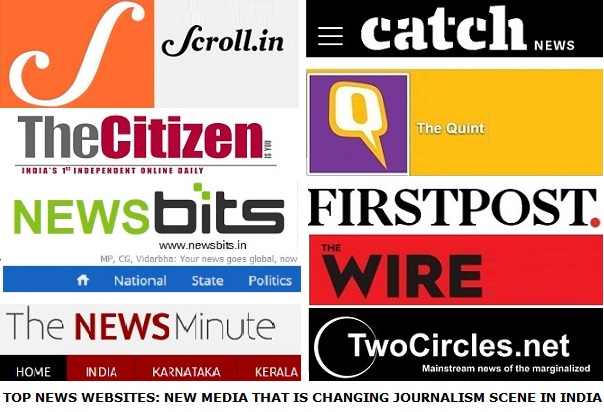 The second media revolution has arrived in India.

News websites have emerged as flag-bearers of independent journalism.

This was needed as traditional media was facing criticism for its failure.

Leading newspapers and TV channels were failing in objectivity.

It was being rued that the fourth pillar of democracy was crumbling as journalists were no longer questioning those in the power. Media was accused of toeing 'government line'.

With TRP becoming the sole criterion for news channels, the situation had become even more critical. In the era when 'mainstream media' was losing credibility, the websites have emerged.

These websites are now giving space to hard journalism. There are articles questioning the official position and reports that present the other side of the picture too.

NEWS SITES SHOW THE WAY IN THE ERA OF 'PAID MEDIA'

Not just stories that don't get reported in 'mainstream media', the News websites are carrying special reports, giving space to dissenting voices and opinion pieces--the kind of articles that are not published in leading newspapers or issues not discussed in TV studios.

While terms like 'Presstitutes' were coined, 'credibility became the biggest casualty' in Indian journalism. Journalists had to chose either of the two sides--Manmohan or Modi. Even after the election, there was no change in the situation.

Just when it had become the fashion to say that 'long reports' were out of fashion, narrative style of journalism made a return.

Thanks to these websites. One or two may be agenda-driven but they do provide space to alternative opinions too.

Scroll [Scroll.in] was among the first such websites and it has been quite successful. Senior journalist Siddharth Varadarajan's The Wire [Thewire.in] is known for serious, issue-based journalism.

Catch is associated with the Patrika group and it has expanded in a big way.

Similarly, Seema Mustafa's The Citizen [Thecitizen.in] comes with insightful reports, especially, with regard to conflict-prone regions.

JantaKaReporter is a major news portal, which has redefined online journalism in India. DailyO offers insights and opinions.

HuffingtonPost is well-known and among the pioneers in online journalism in the world. Its India edition has grabbed eyeballs.

Newsd has emerged as another competition for major news websites. It focuses more on the App. NewsLaundry is yet another portal that keeps an eye on media.

Thenewsminute [thenewsminute.com] gives special coverage to Southern India--states that are not given proper attention in 'North-based media'. Twocircles.net is well-established and reports about the marginalised.

There are other websites too. Existing newspapers and magazines like Outlook and Caravan also have high quality content on their websites. With social media proliferating, the reach of the content has also increased.