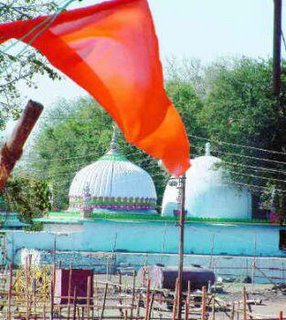 One could do nothing but wonder what madness was going on when the Bhojshala-Kamal Maula mosque issue suddenly dominated the headlines on Friday.
All channels kept on saying that Bhojshala was a temple. For god sake, you ignorant men how you call yourself journalists, all of you without bothering to check that it was a Paathshala (A sanskrit school) built by Raja Bhoj in tenth century kept on making a fool of all of us.
Everybody including Hindus never claimed it was temple. It never had a idol and to this date the issue is that Hindu Jagran Manch wants to perform Basantotsava. The HJM wants to bring an idol of Saraswati that is in London Museum to Bhojshala and instal it there. Now Kamal Maula Mosque was built in the complex but there was no demolition of any temple because there was no temple at all.
Now CNN-IBN kept on making a fool of itself. The anchors hadn't bothered to check with Arcahaeology Survey of India or historians or say local residents of Dhar and kept on saying the same. The flash kept on referring to Bhojshala (don't they know that Shala means school) as a temple and the entire nation was misled through out the day. But I must say its reporter did a perfect job. He was the most involved amongst all reporters present in Dhar. But the desk was amateurish.
The NDTV did the same. And so was Star TV and briefly Ajtak also erred. Only Sahara was correct and referred to the dispute in the right perspective. Oh! all disputes are not like Ayodhya Dispute, a xerox or facsimile of the same issue. Worse, no one was sure if it was 11th century or 16 th. Yaar padh likh lo. Delhi ke aagey bhi hindustan hai. It is shameful of journalists.
Even the agenices were wrong this time or rather casual. Without checking facts, they released stories. The credibility of UNI has been eroded. Lately the UNI and its Hindi version Bhasha has been depending on published stories on papers and rehashing them to produce them at a later stage. Naturally, it leads to such faux pas. Being an old news agency UNI should be careful. Credit goes to PTI for reporting correct news story with all the right facts.
Posted by editor at 5:18 AM

Hi, this post of yours has put the whole thing into perspective for me. Many thanks. Best of Luck!

same is with our polititians...i think they need to rewind nd go back 2 there school times...if a person is not concern abou his respect ..how can he runs country??