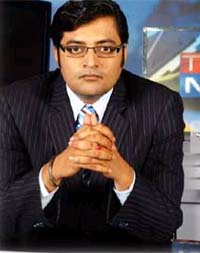 It was an interesting debate on Times Now. Not just rhetoric but facts and information. One guest took exception on a comment that OBC and SC/ST docs wouldnot be as good as uppercaste after all they have to pass the examination of MBBS. Valid point.
Mahesh Rangarajan said that Mohammad Rayla who came for treatment of Pramod Mahajan was an Indian doctor who is one of the world's leading doctor who was selected for MBBS from the OBC category in Tamil Nadu where some Muslim castes fall under OBC.
What I particularly liked and I do agree is Rangarajan's point. That protesting medicos were polishing boots and holding brooms.
Do they hold sweepers and bootpolishers in such contempt. If the sweepers strike their work the country will surely stink a day and everything would come to a grinding halt.
And docs represent the Indian mentality that manual labour is demeaning. All these 58 years we have not been able to get away from this contemptuous attitude and still look at these professions with contempt. Sad.
Rangarajan said that whey all over India sweepers only belong to one caste and never one finds upper caste sweepers. Don't the sweepers every have the right to become doctor. He gave examples of commerical organisations and industrial associations where only people of particular castes are found in Northern India. He said that South India is far ahead than North despite the fact that reservation is much more in Southern states and they are better governed. He gave examples of Dalit and backward industrialists emerging from South. Other people in the debate also put their arguments against hike in reservation. I was wondering why I liked the programme. Just because Arnab let everybody speak and not like Rajdeep trying to cut short the speakers and grabbing screen for most part of the programme. At least Arnab lets people speak and the pitch of discussion was not raised to the levels of cacophony.
Posted by editor at 10:45 AM

Good point but like all other journalists you are missing the point.

i am not familair with southern politics but I do know a lot abt politics in North India. let me point a few facts abt this issue to you. Even though its really ur job to do so.

1) In states like UP electoral caste coalitions always included Brahmins, Rajputs, Other FWds, dalits and Muslims on one side and the other cates (so called OBC's) on the other side. If OBC's were actually so so oppressed why would a coalition be needed against them!

As a media person u should be demanding that the government should give us hard numbers before it starts implementing such sinister schemes.

i am against reservation for dalits also but I am not insisting on its abrogation simply beacuse there were instances of opression but they were committed by mainly OBC's. Moreover if past opression is a criteria then Brahmins should be compensated because they have been discriminated against by every regime since Mauya time.

Moreover the presence eminence of brahmins is because they gave importance to education and it is not their fault that the world evolved in a manner that educational skills are the most imp today. If the productivity curve had emphasised vocational skills may be they would have been most disadvantaed.

A Fitting reply to reservationists

I agree about OBCs. I never say they need reservation. Most of them in UP, Rajasthan, Haryana and MP are so empowered that upper castes stand nowhere to their might. Most of the OBCs don't need reservation may be a few communities in them but identifying them is very tough. Again that takes us to the route of economic status of family for reservation. For SCs and STs I think reservation to an extent is ok but that should not be lifelong and for their children also and in promotions.

what caste is mahesh rangarajan? sounds like upper caste to me. probably brahmin. is he meritorious? can only people of his caste be meritorious? why is he called in by the studio to comment on the quota issue, when the sweeper who works for Times Now could have done equally well? why is there this rangarajan on the show, but not a sweeper? why is Rangarajan hogging so much airtime on NDTV, Times Now etc? could his caste be a reason?

while on the subject, what caste is arnab goswami? why does Times Now need an upper caste head? is there any evidence that a sweeper at Times Now, if properly trained, can't do the job as well as the uppercaste goswami?

I would like to do the analysis of the reservation issue.
Why was the provision of reservation kept?-------FOR social JUSTICE.
Why are we opposing Reservation?-----Because of the question mark on the merit, capability and intelligence of the people who are coming from reservation? And the answer to this question mark is that they are less capable and less intelligent.

WHY are we also not opposing the reservations of other kind? e.g. for states, e.g. in HImachal, in many professional colleges, majority of the seats are reserved for Himachl BOnafide/residents and also on rural/urban background?
Also we are availing reservation as Indian nationals.

Why are we keeping the embarassing question mark on heads of people who come from caste/tribe reservation only? why NOT ON OTHERS?
AFTER ALL WHEN WE ARE NOT READY TO ACCEPT RESERVATION AS A CORRECT TOOL OF SOCIAL JUSTICE, WHY DON"T we oppose RESERVATION ON EVERY GROUND? MAY IT BE ANY? AFTER ALL IT IS THE QUESTION OF MERIT, CAPABILTY, INTELLIGENCE.
LET US PUT THIS QUESTION MARK ON EVERY BODY's HEAD WHO AVAILS RESERVATION OF ANY KIND ( May it be state, rural, urban, caste, tribe, economic status) ----- and so many other kinds)
LET us come up with a proposal which says to abolish reservation on every ground.
I would love to see how many people come up in open with such a proposal and how many are ready to drop reservation as a whole? with open hands and hearts?