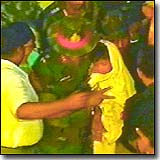 FIVE-year-old Prince who had fallen into a pit in Kurukshetra (Haryana) was rescued and the entire nation heaved a sigh of relief. Millions had watched the efforts to save the boy on television.

Zee TV stole a march over other channels as it telecast the entire exercise without any commercial breaks. Its anchors and reporters kept on claiming that it was Zee TV that had forced the government and officials to move fast and kept on patting their own back.

So what if the channel didn't show any ads, the TRP surely went up and the millions it must have earned through SMS messages from all over the country would more than compensate for that. The SMS to channels cost much to the consumer. And 50% of all the earning goes to the telecom company and the rest to the channel. Isn' it?
Posted by editor at 1:24 AM

As far as my opinion is concerned, all the news channels were trying to cash in on the plight of a poor boy. Their concern was not his wellbeing but TRP. Read my views here

Absolutely ridiculous comments so far. One thing is for sure, all the TV channels are really interested is sensationalism...else if the focus was news dissemination, one shot coverage followed by textual update on a ticker is sufficient...

However, this is not the case, these channels want to show the same thing again and again for hours together....

Crazy are the channels and crazier are the viewers....