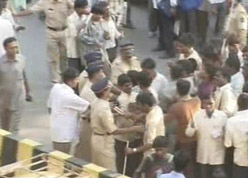 Either it is brutal attack on blind protestors or the cane-charge on Dalits protesting Khairlanji killings in Solapur, the police have remained the same brute force they were in pre-Independence era.

Unfortunately, the images of such brutality no longer seem to perturb anybody. The force that earns its wages from citizen's tax and is made to protect them, beats the same citizen in violation of all civilised norms.

Never the option of water cannon to disperse the mob is considered or for that matter rubber bullets or tear gas. However, the unarmed and innocent are beaten up black and blue--worse than the days of Raj.

No Human Rights Commission, State governments, Centre or any other person holding constitutional offices speaks against this abominable practice. Who gives this right to the police? Even national channels that show such images don't raise the question properly so that people could be aware of this ugly trend and the fact that it is simply illegal.

On one hand, Supreme Court directs the states to initiate police reforms and on the other hand such terrible lathi-charge as witnessed in the commercial capital of India ! The barbarians were beating the common Indian citizens as if they held deep grudge and vengeance against them. Ironically the hands of the same police are tied when it comes to dealing with a politician who breaks law.

Seems he society has accepted that the police have full right to beat any innocent. Alas, many 'activist journalists and anchors' who don the garb of preachers on any Matuknath-Julie incident, disappear from the screen or turn reticent.