Is it Maoist Republic of Chhattisgarh? 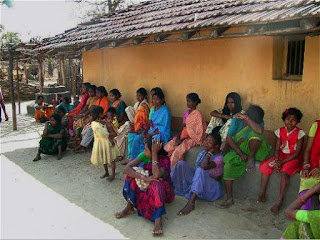 Once again Naxalites have killed 55 police men in an ambush in Bastar in Southern Chhattisgarh. (If the same incident had occurred in Uttar Pradesh, imagine what sort of coverage media would have given to it and the crumbling law-and-order situation?)

The mass killings of villagers and policemen has become a norm in Chhattisgarh and the predominantly tribal state appears on the Indian national media for a while just when such a tragedy occurs.

Else, nobody is bothered about Chhattisgarh. Vast regions in the state are controlled by Naxalites. The Red militiants rule this state and if it was not a land locked state, Chhattisgarh would surely have been declared the Republic of Dandakaranya and seceded from the union. (The Naxals aim for a separate Dandakaranaya that includes parts of MP, Chhattisgarh and Maharashtra).

It is Naxal terrorism but does media even remotely term it as such? Arrest of a man on suspicion of links with (say Lashkar or any other organisation) from Lucknow or Indore creates nationwide news but Red militancy is just not treated as terrorism.

And it is the poor tribal who is being killed. The cops who die are poor tribals and those who kill are tribal indoctrinated by Naxals. The tribals have suffered for decades and have been exploited, true, but now the same exploited people are pitted against each other. The Rani Bodli post was stormed by over 300 Naxal guerillas who attacked the police.

Grenades were lobbed, petrol bombs thrown and heavy firing resulted in police running out of weapons and getting outnumbered by the CPI (Maoist) Naxal guerillas.The people's resistance Salwa Judam movement in the state comprises of tribals. In the last two years 676 people have died in the state in leftist insurgency much more than deaths in Jammu and Kashmir.

But did anybody ask for resignation of the Chief Minister Raman Singh of BJP. Many in Delhi would never even have heard his name. Of course, we hear about UP and demands for resignation from Mulayam Singh every week or so. Why such double standards? Is Chhattisgarh not one of the states of this country?

(Picture of family members of the dead policemen, grieving in front of bodies in Bijapur in Bastar)
Posted by editor at 11:14 AM

Till the other day I thought it is only the north eastern states that are being neglected by the Centre. But you are right that it's the same with Chhattisgarh.