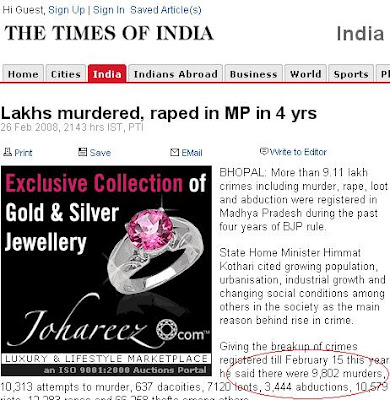 See this headline in the Times of India. The figure of murders is just a few thousands but the headlines says lakhs murdered and raped.
The truth is that even the murders and rapes together do not account for more than 5,000. Yes, Five Thousand.

But the headline screams 'Lakhs murdered'. Even the figure of whole India is not 'lakhs' that obvious means, at least 2 lakh with no upper limit.

Apparently the sub-editor didn't bother to read the story. The figure of 9.11 lakh includes everything from cattle theft to power theft and non-cognisable offences.

But he carelessly used the figure in headline. This is not sensationalism alone. It is poor and shoddy editing, which even tabloids can't afford to do.