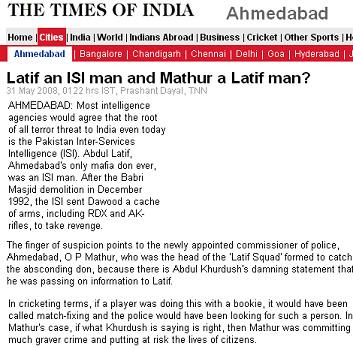 A series of stories that threw light on the alleged underworld connections of Ahmedabad police commissioner OP Mathur, has now resulted in vengeful action as Mathur got a case registered against Times of India's editor, crime reporter and a photographer.

The paper recently published reports on former underworld don Latif's links with Mathur. Stung by the revelations, the cop himself made a complaint and the case of sedition and treason (anti-national activities) was registered against the TOI Residet Editor Bharat Desai.

The Gujarat police's action is highly condemnable as it didn't file a defamation suit. Rather, a case of 'waging war against the Indian state' was made against the newspaper. The paper reported that many cops were on the payrolls of gangsters and criminals.

Mathur had allegedly passed information to a gang leader (Lateef) though he should have been hunting for him, wrote the paper on the basis of documents including a CBI inquiry. The paper maintains that its aim was to highlight the antecedants of the police chief of the city that is high on terrorists' hit list.

The FIR also named Prashant Dayal and Gautam Mehta. Dayal is crime reporter but Mehta, a lensman doesn't even work for the paper. It is heart-warming to see TOI that had become a soft paper lately, take on the top cop.

Read the Times story on Mathur describing him as ISI agent Latif's man.

Hey guys, we are a year old media blog from Goa... Just wanted to pass this post around...

HOW GOAN NEWSPAPERS SUCK UP TO THE CASINO LOBBY
Hey guys...
Sunder Advani and gang are at it...
The casino man who has singlehandedly made way for the setting up of the Casino industry in Goa in face of whimsical political postures and public ire...
And in planting pro-casino's stories in newspapers like the TNT and now Herald, Sunder seems to be spending his money well...
After the Navhind Times carried a plant filed by Dinesh Patel as a Page 1 flier, Herald hasn't been too far behind...
Yesterday's Herald carried a press release which had Sunder Advani expounding on how well Caravela treats their staffers (if one considered the salaries we used to get in Goa, a deck hand at the Caravela would have got a bigger pay packet than us journos

Jut because Times of India says something does not hold water..Yellow Journalism, Blackmailing is name of the game in today's newspapers.

IPS ASSOCIATION HAS BACKED MATHUR FOR HIS ACTION AGAINST TIMES OF INDIA. WITH JUST 50000 CIRCULATIN COPY TOI IS A MINOR NEWSPAPER OF AHMEDABAD.

IT IS EPITOME OF YELLOW JOURNALISM, BANANA NEWS... IT IS A CONGRESS GAME TO FIND ANY STUPID EXCUSE TO ASHAME MODI GOVERNMENT.

MATHUR IS ONE OF THE MOST UPRIGHT AND ADMININSTRATIVELY STRONG OFFICER, ANTI RIOT AND TERROR SPECIALIST