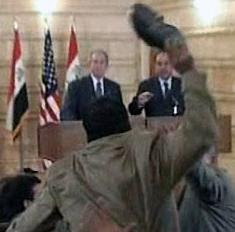 The moment cameraman Muntadir Al-Zaidi threw his shoe at George Bush and the later ducked it to face another one which also flew past him, it caused a storm in diplomatic circles as also creating ripples in the media and blogosphere.

The ugly incident did reveal the rage of Iraqis who feel Bush responsible for messing up their country. Over a million have died in Iraq over the years due to economic sanctions, war and local militias' regular battles.

Heavily escorted Bush may not have faced protests on the street but the journalist took up cudgels on their behalf and did his best to insult the once-most-powerful-man-on-the-earth.

To Dubya's credit, he did gain composure within seconds and handled the situation well. But in Arab media and blogosphere, Zaidi's action has also evoked some sort of sympathy and support.

Zaidi also called Bush, 'Dog', which was heard on television across the world. Now he has been arrested and faces a minimum sentence of two years but there are demonstrations organised to secure his early release.

His outburst in Arabic can be translated roughly as, 'This is a farewell kiss, you Dog!'. In the middle-east, from Egypt to Yemen, Zaidi is hailed as a hero and termed the 'Proud Arab'.
Posted by editor at 10:50 AM

Your blog is loading very slow for me and maybe other readers. I can't see anything. You should check it with an internet speed test.