Will The Hindu's aggressive advertising campaign against rival newspaper succeed!

For years The Hindu remained a respectable newspaper in North with a limited circulation.

Its reputation was mostly for its traditional style of journalism and restrained reporting in terms of Bollywood, celebrity gossip and trivia.

It continued to be a dominant paper in South India. But its Delhi edition couldn't pick up. Hindustan Times, Times of India (TOI), Indian Express remained the top newspapers though Express' circulation has been falling over the years and has drastically decreased in last two decades.

Now 'The Hindu' suddenly seems to have woken up from its slumber. The aggressive ad campaign cleverly shows that readers of The Hindu are more aware about the world than the rival's, who are more aware about Bollywood and love affairs than real issues or political affairs.

The ad shown on TV channels also suggests that people reading a particular paper are morons who know only about Hrithik Roshan's name Duggu with which he is addressed at home and Page 3 parties but have no real general knowledge. 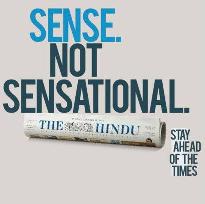 The lip movement shows little for imagination when they are asked which paper these morons read. Clearly the rival would not be too happy. But does Hindu has a plan to take on TOI or even HT. It has no presence in Mumbai or Kolkata.

Unless it has a long-term plan, in terms of editorial revamp, it can't change the habit of newspaper readers. Times of India might have focused excessively on P3 culture. But as far as quality of journalism is considered, only the real morons would take the campaign seriously.

TOI and The Indian Express are also known for doing wonder journalism in terms of breaking stories. The Hindu rarely published a national story that is either revealing or that can shake the entire nation (or has wider public interest). The South-based Hindu mostly reports official functions, drab events and dull press releases.

Either it is the story of police framing innocents or story of army personnel getting medals by killing civilians who were termed militants are rare to be seen in The Hindu. It might run an advertising campaign that targets TOI but the paper will only get visible if it takes anti-establishment journalism seriously.

Though considered a pro-left newspaper, it never pursued stories on Gujarat carnage or the anti-Christian violence in Tamil Nadu and Karnataka. Its reporting on terrorism were also flawed as police versions were given in case of Ajmer, Malegaon and Mecca Masjid Hyderabad blasts, that later turned out to be the handiwork of right-wing groups.

Not publishing trivia is fine. But what is more important is that newspapers should practice journalism sincerely. Papers that publish scams and real hard stories get noticed immediately. To survive and thrive, The Hindu needs to do much more in terms of good journalism, stings, stories exposing the corrupt, before it can fight the war with either of the big papers. Of course, the ads are fun.
Posted by editor at 11:19 AM

TOI and HT are leaders in delhi market. Indian express is nowhere near. In fact, The Hindu is third as far as circulation is concerned. Please check your facts.
Regards

Anonymous: My facts are fine. I have not included Mail Today either.

Indian Express has much greater impact, and it is in this context that this piece has been written.

Of course, you have every right to disagree. And I don't have anything against The Hindu.

The TOI cannot match the Hindu. I have been an ardent reader of both the newspapers and after 2 years of sincere reading i can say that TOI is owned by the UPA (always pro-gvt.) whereas The Hindu will give credit to the Gvt. where it deserves and has the guts to go against the Gvt. also. It does not dilute the seriousness of the social issues. if there is ever a chance People in India are going to stand up for a national or social cause, it will be because of the Hindu.TOI basically publishes entertainment news and has some elements of real news.But, that is not the need of the hour.The editorial content of The Hindu is unmatched.It presents a very balanced opinion and leaves the readers to form their own opinion unlike TOI.
P.S: I have nothing against TOI.It is high time that TOI starts concentrating towards the real issues plaguing India