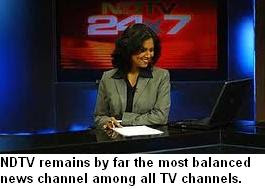 The beheading of two soldiers was one of the most shocking story but in reporting this TV channels seemed to have just a single focus: high TRPs through high-pitched debates which sounded like war cries.

Killing the soldiers was an extremely horrific act. The nation was in grief and shock. But no less horrific was Naxalites' act almost at the same time, killing 12 CRPF jawans barbarically and even cutting the stomach of a soldier to insert a bomb inside the corpse.

This incident occurred in Latehar in Jharkhand. How much time did the channels dedicated to Naxal issue? But in reporting the Indo-Pak LoC conflict, TV channels clearly went overboard. If Pakistani army did it, it was shameful, said even Pakistani officials including Gen Pervez Musharraf.

But for channels, not just the 'hostile neighbouring army' but entire Pakistan and its people had to be painted as an enemy. There was no journalism, no attempt to show the other side of the picture and there was no concern whatsoever that this region can't afford to go for a war.

For them, it's just a war for TRPs. The more you shout, yell and turn the opponent into a monster, the more viewers you will get. Our claim is correct, fine. But other party's claim can't be reported because it is 'un-patriotic'. This is not journalism. This is not nationalism either.

Indian Army has followed a great tradition and has a history of successfully dealing with all sorts of situations. They can very well counter all situations. TV channels should realize that there are strategic issues involved and everything shouldn't brought to this level.

Media can change public opinion and this it must act very responsible. When TV channels' anchors become judgmental, they influence the public and instead of clearing a picture, often distort it further. This is simply disgusting. But will our TV channels ever learn it?
Posted by editor at 1:03 PM