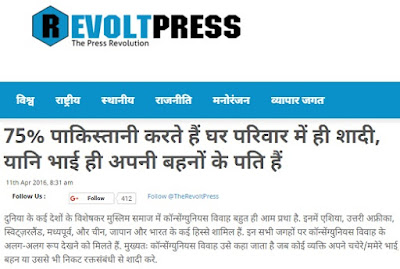 What's the job of media? It is informing public or distorting facts in order to spread false information?

Ironically, getting hits seems to have become the sole criterion for success in online media.

As there are thousands of websites, the hits will come only when you give bizarre headlines.

RevoltPress, a website, that delivers news in both Hindi and English, has taken this 'bizarre' to an extreme.

Take for example, the news that has been show here along with the post. It wrongly says that Pakistani men marry their own sisters. The headline clearly suggests as if it is incest that is prevalent in Pakistan.

The intro begins with the practice in Islamic world. The fact that an absolutely misleading news is not just published but it's being posted widely in Facebook groups and aggressively pushed, shows that they have no qualms about their brand of 'Yellow journalism'.

Such stories get them HITS, which bring some money in the form of advertisements and also a bit of name for the 'media group'. It today has nearly 1.9 lakh likes (followers) and hence reach of such articles keeps increasing as they keep posting such articles, again and again, with an interval of few days.

As far as the particular misleading post is concerned, the truth is that there are marriages between cousins in Pakistan. But it is common in India too. In many parts of the country, there are marriages among cousins in Hindus. In Andhra, it has been common for the girl to marry her real maternal uncle (mama).

But calling a cousin as 'sister', giving an impression of 'incest' and its prevalence in entire society, is disgusting to say the least. Sadly, journalism is the biggest casualty with the proliferation of such news websites. This is perpetuating false myths, spreading hate and agenda-driven activity that needs to be condemned in the harshest possible words.
Posted by editor at 3:01 PM