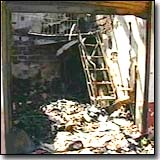 NDTV scored over other channels with its expose of police highhandedness in the riots at Ullal (near Mangalore in South Kanara district) where there was no Communal Riot or Hindu-Muslim Riot, rather police involved in rioting, arson, loot and destruction.

The Urdu press was reporting the stories but surprisingly none of the mainstream press picked up. NDTV with its high viewership in South was the only national channel to go and investigate. And it has truly scored.

It is a national issue that the communalisation of police has reached as far as Southern coastal tip of the country. The link to the story is Here.
Posted by editor at 8:34 AM

The link does not work, but I've heard of this. It is very tragic. I've never been a fan of NDTV's management ( I don't like Arundhati Roy's cousin), the station does an excellent job of reporting.

Today, when a male friend and a colleague of mine came to pick me from my rented accommodation, an ex-minister of Punjab in India, who lives in the next house told us that we were not allowed to stand there. We told him that in a democratic country everybody has a right to stand anywhere. He said it's an area where families stay and that we do not stand there. He asked where were we working. We told him we were journalists (we work in a reputed English daily of India). We told him that we were responsible citizens and we knew what's wrong and right. What's acceptable to our culture and what not. And there wasn't anything wrong in standing by the bike and waiting for a friend to come. We told him to stop us when we stand in his veranda. The road belongs to people. Being in such a profession, we are think we’re considered reasonably responsible. Wonder how they talk to school and college students?