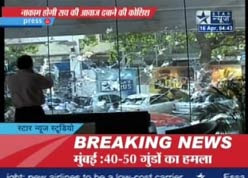 The office of Star News (Hindi) was attacked in Mumbai by nearly 50 activists who claimed to be members of Rashtriya Hindu Sena. The visitors to the office were taken aback by the mob who were armed with hammers, rods and lathis.

They smashed the glasses, windowpanes, damaged cars and also attacked the staff. Chandramohan Puppalla, the Executive Editor, was injured. Surely it is a sad development on lines of the attack on Geo TV in Pakistan. Media organisations have expressed their solidarity with Star TV on the attack. We also condemn this attack and demand urgent action against the attackers.

The activists of Hindu Sena were angry with the TV for showing the Hindu-Muslim couple, teenaged Khushi Agarwal and Kadir of Surat, whose story was shown on the channel a couple of days back. For Khushi-Kadir report, click here.

And if you want to know how they fell in love and the entire story. Click here
Posted by editor at 6:18 AM