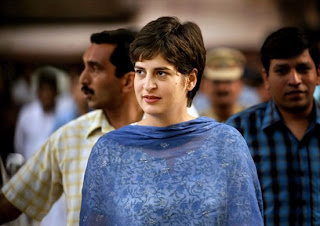 Priyanka Vadra had recently visited Vellore to meet her father's killer Nalini, who is lodged in the jail there.

Though initial reactions were of shock. All news channels picked up the story that a daughter met the woman who was involved in her father's assassination. For Priyanka it was a visit 'that she thought would make her come to terms with her loss'.

Her brother Rahul also confirmed the visit and said that he stood by her sister's decision as the siblings don't believe in violence. The visit must not shock anybody. For a young girl who saw her father blown up in a bomb blast on Television, it must have been immensely painful in the years to come following Rajiv's assassination. 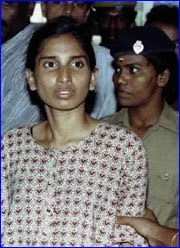 All these years it must have been bugging her that what had possessed this group of LTTE activists who plotted to kill Rajiv. It was surely a personal visit and must not be looked at with any political angle.
Priyanka reportedly asked Nalini that why she got involved in the assassination (the human bomb was Thanu alias Dhanu). She also asked Nalini when did she saw her father last and told her that every problem can be solved through peaceful dialogue and discussions.

Despite their dynasty rule and other human fallings, the family has lost two great --Indira Gandhi and her son Rajiv. For an hour Priyanka spoke to Nalini and the news emerged through an RTI (Right to Information application). Else most of the people until now believed that she visited the temple in Vellore.
Posted by editor at 1:38 AM