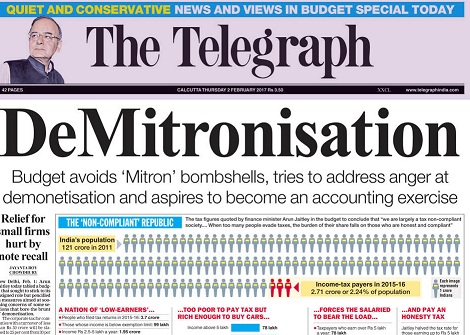 Telegraph, the Kolkata-based English daily is known for its unique headlines.

But on Friday, the newspaper made headlines--for the worst possible reason.

The news spread like wildfire among the journalist community in the country.

Print media is going through bad times in India. English papers have been closing their editions. Many papers have retrenched staff and several others are planning to give the pink slip to journos. Outlook report says that 700 employees were laid-off.

Demonetisation gave an opportunity to the media barons to justify their action--retrenching the staffers. Hindustan Times shut its Bhopal, Ranchi and Kolkata editions recently apart from closing many bureaux.

HT management's decision was weird because the paper was not in loss. But now another major newspaper going in for job cuts, sends a strong message. Other smaller groups may also follow suit.

This is bad for journalism as there will be fewer people on the ground to report. As profession, journalism was never lucrative, except for a few, but at least one could run household. Now even that is going to be difficult.

Clearly, bad times ahead for journalism and journalists. This will have affect on our democracy also, which remains strong if the press is strong. If the fourth estate is weakened, the voices of people won't reach others--the government and the citizens.
Posted by editor at 1:09 PM