'Give Nishan-e-Pakistan to LK Advani' 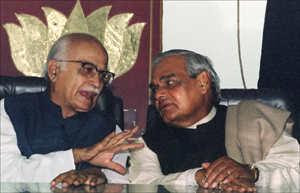 Not may journalists write political analyses these days and it is rare to see journos call a spade a spade.
Pankaj Vohra wrote a good piece 'Badge of Honour' and blamed Advani for politicising the Bharat Ratna Awards.
In this article that was published on the editorial page of Hindustan Times, Vohra, the paper's political editor writes:

Whether Vajpayee gets the Bharat Ratna or not, Advani has surely qualified
for the Nishan-e-Pakistan, that country’s highest honour, by praising Mohammad
Ali Jinnah and that too at his mausoleum. The RSS, which cleared Advani’s name
for being the BJP’s prime ministerial candidate, will second such a
proposal.

We can safely assume this because the sangh parivar has endorsed Advani
though he has not changed his stance on Jinnah. It will be a coincidence and a
moment to cherish for the parivar if its ‘Vikas Purush’ gets the Bharat Ratna
and its ‘Loh Purush’, the Nishan-e-Pakistan. After all, according to the Sangh’s
ideology, we are one people and one nation. And, the end is, of course, ‘Akhand
Bharat’. Some of the aides who helped in Advani’s image makeover — from a
staunch Hindutva supporter to a moderate leader — can also be given some other
award for trying to bring together the people of India and Pakistan.

If one keeps the sarcasm out, Advani, by proposing Vajpayee’s name for
the Bharat Ratna, has tried to strengthen the suspicion that many had: Padma
awards and the Bharat Ratna are given out of political considerations.

Vohra further says that in order to pursue his own political agenda, Advani has dragged Vajpayee in the controversy and tried to play a masterstroke. Though Vajpayee's failure in checking Kargil intrusion, Agra summit debacle and his own past including suspicion on his role in Freedom movement and the ideology that is not in sync with constitution, make him unfit for the Bharat Ratna.

So what about Nishaan-e-Pakistan. After all, the only Indian to get it was a Gandhian and Congress-man Morarji Desai. (Though not many will tell the exact reason why he was given the award, after all, it is a diplomatic secret).

Then what the heck about Advani getting it!
Posted by editor at 2:01 PM

Advani has not politicised Bharat Ratna. Congress govt in 1990s bestowed the award of Rajiv Gandhi but can anybody question what was his contribution. He was only into his one term of prime ministership.

The same congress decided to give Bharat Ratna to Subhash Bose who was beyond any award. This clearly showed that Congress was in forefront of managing awards.