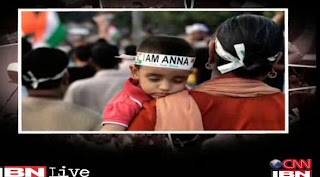 Anna Hazare's movement seems to have struck a chord with the urban Indian middle-class though there is support form rural areas also.

Definitely there is anger among citizens. The Congress-led UPA is now shaky as it hasn't encountered such a popular surge of people's movement.

But it is also true that the news media, particularly, the TV channels have played a key role in keeping up the tempo. By ensuring round the clock coverage and maintaining the pitch, they have ensured that the protests occur across the country and there is a mass frenzy.

Even though the channels haven't stated much about merits and demerits of the proposed institution of Lokpal or educated citizens about the implications of the ombudsman, TV and newspapers are visibly the driving force behind the anti-corruption movement.

It is rare to see issues taken up with such seriousness. Even the India-England cricket series was ignored. The frenzy has been such that TRPs are also rising. Either it is kid getting named Anna by his parents or an elderly walking barefoot to express support for Hazare, everything is being telecast enthusiastically.

The movement has also shown how media can effectively be used. Though the propriety regarding active participation of news media in a movement is debatable, it is true to an extent that Indian media has voluntarily become a party, a sort of participant, in this drive for Jan Lokpal Bill.

There are charges that elitist media groups that are mostly anti-reservation and want to establish hegemony over institutions, are behind this movement. No wonder that the ruling party feels that this monster (mass movement) is a media creation.

There is also a fear from sections of Dalits, OBCs and tribal intellectuals, that the Anna Team is more upper caste dominated and has no member from the under privileged sections including SCs/ STs and other religious minorities.

Anna Hazare's movement may not have grabbed as much attention if the TV channels had ignored it after a day or two. It may not wipe out corruption. It may be urban-centric. It may not be something like a Tahrir Square revolution.

But it has propelled Anna Hazare to the centre stage of Indian politics. Arvind Kejriwal, Kiran Bedi and others are also in the focus. Perhaps such a movement may not have succeeded in an era when we had just a single channel--Doordarshan (DD), which today shies from reporting happenings at Ramlila Ground.

It is true that channels have given excessive coverage to Anna Hazare. But that's what happens in case of all major movements. It has given Anna Team a bargaining power, it has brought people on the streets and it has forced government to become flexible and agree to talks.

Let's wait for a few more days to see if Anna magic continues or it was just a passing fad for TV!
Posted by editor at 12:54 PM

Why congress is playing dirty game,but people got awareness now they can't fool around.