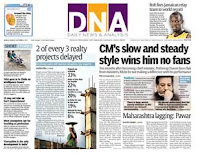 They said that Swamy's article was divisive and it used derogatory language for Muslims but was it just an editorial decision to let Swamy's rant go into print or part of a plan to position DNA as a pro-Hindutva brigade newspaper. The article was indeed in a bad taste.

It also questioned loyalties of Indian Muslims and made absurd allegations on them. I is a known fact that most of the English newspapers and channels are either pro-leftist or pro-centrist. The sole exception in national media is The daily Pioneer, which doesn't have much readership and has lost its credibility.

On the other hand, a large section of urban middle-class and young generation that has been brought up on the right-wing propaganda considers these newspapers and TV channels as Congress mouthpieces. The buzz on twitter and facebook gives this impression.

Though Swamy's article generated heated, it is also true that it was lapped up on the internet and widely circulated. Is DNA now preparing or a new leap. Having remained the third most circulated daily in Mumbai after Times of India (TOI) and Hindustan Times (HT), the paper may now be hoping to target a new readers' constituency.

To DNA's credit, they did publish replies to Swamy's 'objectionable' article. But media watchers say that DNA may be turning itself into a pro-populist paper. There are allegations that the paper was soft on Hindu youths who were convicted for bom blasts and refrained from calling them terrorists. On the other hand, youths arrested in the past were mentioned as terrorists even before trial.

Unlike Pioneer, DNA is a smart newspaper that has a substantial readership in Western India. When other papers can ashamedly be pro-Congress and pro-Secularist, why can't other papers be pro-RSS or pro-BJP or say pro-Hindu interests?

What's wrong in that, after all. Let's see in the days to come if the paper is indeed toeing a slightly pro-right wing line or it was just a conjecture of the eternal commies (communists) among the media circles about the newspaper.
Posted by editor at 12:32 PM