Coverage of anti-Christian violence in Orissa 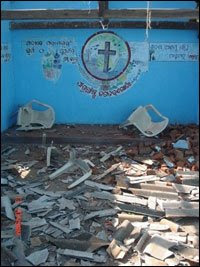 Most channels were confused about the communal carnage in Orissa. The murder of VHP leader Swami Lakshmanananda Saraswati and his associated, led to attacks on Christians in the state.

It took a few days before the State responded. But the news channels and even prominent newspapers were quite delayed in understanding the situation. The battlefield was Kandhamal district where Vishwa Hindu Parishad is quite active. The district also has an unusually large number of Christians (over 20%) compared to their ratio in the state 2.4%.

Among English channels 9X stole a march over others in its reporting of the aftermath of the tragedy. It focused on the trauma of the women and children. Specially, the interviews of victims were horrifying. The fact that VHP and Bajrang Dal cadre gave them only the option to leave Christianity (re-conversion to Hinduism, as they claim tribals as Hindus) else get killed, was unsettling.

A Christian woman was told that she should leave her faith else her daughters would be raped. The fact that nearly 50,000 Christians fled their hometown and hundreds of churches burnt speaks volumes of the failure of the Naveen Patnaik government.
The relief measures are on but rehabilitation will be a major issue. Laxmananada Saraswati's death was a criminal act but taking revenge on innocent Christians was absolutely wrong. Still, the State failed to rein in Pravin Togadia and other VHP firebrand leaders.
Orissa has been the second hate Hindutva laboratory after Gujarat. Though Maoist (left-wing Naxalites) claimed that they had killed the VHP preacher, the mostly poor minority became the target.
Posted by editor at 10:15 AM

what confusion
they were not confused they just didnt want to give enough coverage. They are all hypocrit