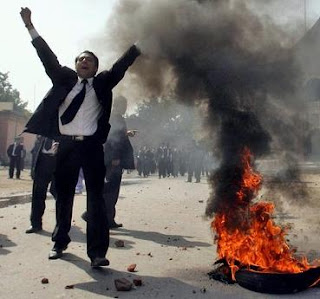 The courts have somewhat retained their image of temples of justice. A strong and fair judicial system is a necessity in a democratic country like ours.

But the media and the state have been ignoring a dangerous tendency among a section of lawyers towards weakening the Indian Judicial system. One after the other Bar Associations in Uttar Pradesh took pledges not to defend a 'Muslim suspect'. And now MP lawyers are following suit.
Neither of the two main national newspapers, nor the other mainstream press took notice of this dangerous development. It is not a patriotic decision, which the lawyers want us to believe, but an unconstitutional pledge.
The BJP and RSS wings that were working among lawyers have managed to communalize the lawyers. Ironically, the failure of journalists to understand this nefarious game demonstrates their lack of knowledge and understanding of issues apart from commitment to fair reporting.

Every person is entitled to have his case pleaded. The killers of Prime Ministers were given lawyers (emindent advocates) and those who rape and kill children get advocates but 'those charged with anti-national' activity would not get the right to have lawyer.

When Bar Associations take such decisions and threaten to boycott any lawyer taking up a person's case, it becomes a serious issue. In recent times, the lawyers who were called from other places have been beaten up by local lawyers.
Strangely, there is no action. The Centre has not bothered to take stock of the situation. Editorials are missing on this crucial subject that can have vital implications for our future, as they curb civil liberties.
What, if a person is totally innocent, and is framed by police. Just because the police said a person is a suspect, he will languish in jail as there will be no lawyer taking up his case. This is unbelievable but is happening in India, in 21st century India.
In UP, the lawyers who fought such cases were expelled from Bar. Though a few voices have emerged and magazines like Tehelka have taken up this issue, it is going to further divide the society and create a situation where the poor will be worst affected.
It is the poor person who gets implicated by police, mostly, to hide its failure and many innocents will suffer, which will further heighten the feeling of injustice among minorities. Recently, Tehelka's correspondent Srawan Shukla did a story on the subject. He also cities the incident where lawyer Mohammad Shoaib was attacked in the court.
Unfortunately the malaise has spread to other states. Just this week Bhopal lawyers also took the same pledge. Though the lawyers are supposed to be intelligentsia who should guide the society, they are acting as agents of retrogression and fanning communalism, even dividing judiciary on communal lines.
If this is the way things go, what's the need for a judicial system involving courts and lawyers. After all, police says that a person is terrorist or a rapist, just believe it. Is it where our society is heading? Shame that none of the papers took notice.
Though, it's high time to approach Supreme Court on this issue. Those lawyers who act unconstitutionally by standing in way of a person's fundamental right to trial, should be taken to task. Else, as the saying goes, in this country: Chalta hai...Forget. Go Home and Sleep.
Posted by editor at 2:34 AM

If my understanding is correct be it MP,UP or any other state, there are 100s of muslim lawyers associated with the local bar associations.Do You think even these lawyers wont try to take up such high profile cases which would keep them on newspaper frontpages and make them a darling of the soundbyte hungry 24*7 electronic media?Try and answer this question yourself.

Second you talk about the "unconstitutional" act of the lawyers not taking up such cases well for a moment also think about the professional freedom that one has to serve or not to serve a particular client.A restaurant may refuse to let you eat food there, is that unconstitutional too? In any case these same lawyers in the past have refused to take up the case of murder ,rape loot cases accused.So it there anything new here?We in India are always emotionally surcharged and such things are always done in the heat of the moment.

And also going by your logic of "someone is innocent till the crime is proved" well would you dare say the same about Narendra Modi (yet to be convicted by any court of the land despite all attempts by the sickularist media and so called intellectuals?How about RSS and its affiliates?Has any court convicted them yet?Then why is it that your posts keep referring to these people as terrorists. Is that hypocrisy and double standards?

Those who tried to defend were beaten up by lawyers close to Saffron groups.

Md Shoaib was assaulted and a veteral lawyer barely escaped in Lucknow.