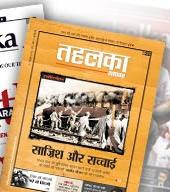 It's heartening to see Tehelka launching its Hindi edition. There is need for quality news magazines in Hindi and though a few periodicals have been launched, they fell short of expectations.

Tehelka, at least, brings to fore subjects that are often ignored by mainstream media or stories which newspapers don't like to publish, as they disturb us. In the era when journals thrive on infotainment and spicy gossip, Hindi heartland needs such a magazine that has concern and which does unsettle us.

Hard journalism is fast becoming out of fashion. Magazines and papers prefer soft stories and reports about fat salaries and fashion. But there is another India. Tehelka may have received lot of criticism but it's a good magazine.

There is no other proof needed for its fairness, as both Congress and BJP have been equally upset with the magazine at different times. For a healthy democracy and vibrant press, Ashish Khetan's reports are as much needed as the ideologically driven (euphemism for biased) stories of Indian Today correspondent Mihir Srivastava.

We do need Ajit Sahi's painstaking stories (or for that matter Harinder Baweja's writings) when seasoned journalists like Praveen Swami become pro-establishment to the extent of writing stories that appear coming straight out of police officers' mouths to save their skins. We need both sides of the stories. Not just about software revolution but also about Vidarbha's hunger and the misery of villagers in Chhattisgarh.

Till date Tarun Tejpal and his team has managed to be different and has presented the other side of the story. Just recenlty Outlook Hindi which was earlier a weekly magazine, became a monthly magazine due to financial reasons. Let's hope Tehelka succeeds in its new avatar.