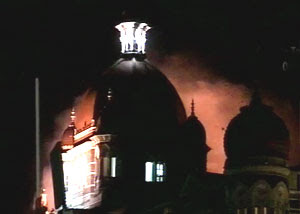 It was nothing less than a war in Mumbai. Sophisticated guns were used in firing, grenades were thrown and bombs exploded as everybody appeared clueless in face of a terrorist strike of such magnitude in Mumbai.

The hotels like Taj and Oberoi were targeted. A restaurant, cinema hall, bus stand, railway station and a hospital were also among the sites that were attacked. Firing and explosions were heard on TV as journalists frantically ran for bytes and looked for the eyewitnesses.

It was an unprecedented attack and TV reports said that fidayeen were involved. Though it will take a few hours for the complete picture to emerge but TV channels were reporting 15 deaths*. The commando operations were planned to rescue the hostages in hotels.

However, the electronic media must think why it goes for sensationalism in an hour of extraordinary tragedy with constant alerts. Shouldn't they facilitate rescue operations rather than causing panic? 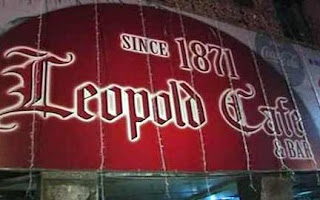 When OB Vans and reporters-cameramen from every channel reach each spot, it makes the job of police and relief workers more difficult.

This is an aspect, which the media must reflect on quite seriously. The army had been called and hostages were rescued as the operation was on till early hours of Thursday. After 50 hrs the siege at Jewish cultural centre, Nariman House, ended.

Later reports have confirmed that over 10 police officials laid their lives in the battle against the terrorists. ATS chief Hemant Karkare, ACP Ashok Kamte and Crime Branch officer Vijay Salaskar achieved martyrdom. The total number of deaths have exceeded 150.

[Photos: The dome of Hotel Taj that was set on fire and the Leopold cafe that was a target of terrorists]
Posted by editor at 10:45 AM

Receive $130 Paid to You Immediately

The LWS Freedom program makes it possible!
Click here to discover how
http://www.lwsfreedom.com/id/greentitan