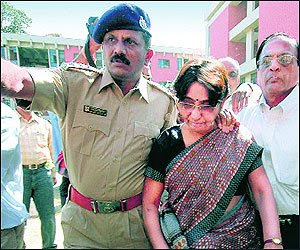 The landmark judgment of Justice DH Waghela of the Gujarat High Court that sent Mayaben Kodnani in the custody, has once again proved that it is the judiciary that has become the sole hope for the poor and the underprivileged fighting against the high and the mighty.

Had the bureaucracy and politicians acted responsibly, the minister should not have roamed free for six years after the 2002 massacres. But Mayaben Kodnani, the minister for Woman and Child Welfare, who incited mobs to kill women and children, has finally learnt that there is a rule of law in this country.

Equating religious fanatics with terrorists, the judge clearly said that 'A murder committed due to deep-seated mutual and personal rivalry may not call for death penalty but an organised crime for mass murders of innocent people would call for imposition of death sentence for deterrence'.

The strong and scathing words of Justice Waghela that indicted politicians and police force, have raised hopes for victims of the Gujarat riots. He even came down heavily on the lower court for giving anticipatory bail to Kodnani.

A gynaecologist who runs a nursing home, Kodnani, had become the ugly face of Gujarat riots. The hands that gave birth to babies, distributed weapons to the mob that had attacked Naroda Patia and Naroda village inhabited by Muslims in post-Godhra riots.

It is not just the anti-Muslim and anti-Sikh riots, but in most cases involving the politicians and persons with clout, the police often prepare loose cases and tamper with the evidences.

Fortunately, the higher judiciary hasn't come under pressure and delivered judgments that symbolise hope and give a message that everybody is similar in the eyes of the law. Justice Waghela' judgment is another reminder for the bureaucracy and politicians to reform themselves else courts step in to act in the space left by them.

After all, in the age of free media, someone can't get away easily with crimes just because they are supposedly high-profile and well-connected. Read a related article about the BJP leader: The rise and fall of Mayaben Kodnani
Posted by editor at 2:17 AM