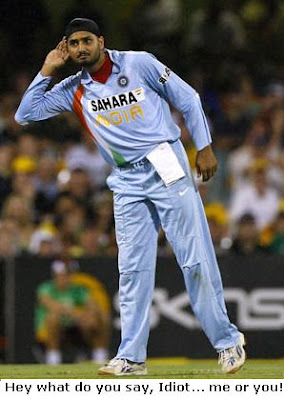 Cricket star Harbhajan Singh expressed his anger over the manner in which TV Channels [wasn't it Star News?], mocked at the Indian cricketers after they had lost the first test to South Africa.

Today Harbhajan blasted the channels for irresponsible reporting and rightly so. By terming three playes as 'Three Idiots', the channels did cross the line. It was neither reporting nor editorial comment, but plain defamation.

Harbhajan is right when he says that an idiot can't take 350 wickets. In fact, TV channels don't have the right to call anybody an idiot, even if someone has made a contribution or not. It's true that Harbhajan Singh, though flippant at times, is a hero.

Earlier also, programmes like 'Match ke Mujrim' have made fun of players. When they score well or take wickets they are eulogised but the very next day they are mocked. Criticism should be healthy and within limits of decency.

You can either praise some one or point out their mistakes. But everybody can make mistakes and it's not a crime. You shouldn't berate them and try to humiliate them. TV doesn't have this right. It's high time the honchos of the media houses learnt it.
Posted by editor at 11:05 AM

It is just not one channel we have many idots journalists who shout on channel and pretend as if their knowledge is much higher than anybody else.
Person like Saba Karim passinh Expert comments on playes like Tendulkar.... hello , how many runs he scored , does he want to know why (How) he was selected ...

I agree with the fact that criticism should be healthy and be within limits.The way Indian channels ,especially news channels use language primarily sounding like mockery and unprofessional,is just not accepted.
Firstly they intrude in anyone's and everyone's personal domain disrespecting their privacy and convey whatever is expected to sell, attract and engage people. Is that what Journalism mean ?

The biggest unaccepting reality about them is they make news out of no news.Rahul Gandhi withdrawing money from a mumbai ATM, running in all major news channals for hours.Unbeleivable !Lets consider the latest example,Youth Icon Sania Mirza's wedding affair was almost a 24 hour update, wheras 76 millitary men who were killed in the maoist attack in the West Bengal only managed to grab few subheadlines for few days.