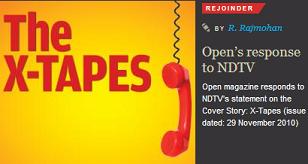 Open, the RPG group's magazine, has definitely taken a lead over other mainstream magazines and newspapers by publishing transcripts of coversation between controversial lobbyist Niira Radia and NDTV anchor Barkha Dutt.

The story is an instant hit and has thrown a challenge at other periodicals including Tehelka, Outlook and India Today. While Outlook responded and published a series of articles on the issue involving senior journalists and the 2G spectrum scam, national news channels and papers have remaind silent.

Will journalists protect senior members of their fraternity? Indian journalism has been different in the sense that private lives and scandals of politicians and public figures were ignored. It was termed sleaze. With introduction of TV channels, Page 3 and celebrity journalism came to centrestage.

But still the media groups avoid publishing dirty secrets of politicians, leaders and business tycoons. Editors say that it is their private life. But even tabloids and channels thriving on sensation avoid touching such scandals. Why?

Is it because of a real code of ethics. Is is that somewhere mediamen fear that if this practice begins, they will also be targeted. By publishing the transcripts of the telephonic conversation (from leaked tapes of Income Tax department), Open has shown a new direction to Indian journalism.

It is not sleaze. It is about self-assessment and introspection also. When news media can criticise others, it should also be ready to take on its own dirt. So far most news channels and national newspapers except Mail Today have ignored the scandal.

But journalists no longer rule the news world. Twitter and Facebook have changed the game. There is pressure and it is better to be candid and stop this holier than thou approach. Media's prestige is at stake in India.

While Vir Sanghvi's website carries his statement, there is nothing from Barkha Dutt as yet. It is Barkha who really faces the charge of lobbying between DMK and Congress leaders. If media groups don't take up the issue, it will hurt their credibility.

It is better to report the basic story on the controversy which is now known to almost everybody. But blacking out the entire episode will turn the reader (viewer) sceptic about Indian news media's fairness.
Posted by editor at 11:00 AM