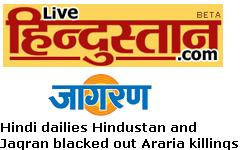 Indian Media has committed an unpardonable sin. Most of the mainstream newspapers and channels either ignored the police firing on villagers in Bihar's Forbesganj or just gave the news a single column space.

Some 'national' dailies who get advertisements from Bihar government did not report the incident for 3-4 days. Only when it became impossible to suppress the news, that the report about the killing of four persons in Forbesganj (Araria) was printed.

This is a shameful chapter in Indian journalism. If there are police excesses, it is the duty of media to report. Even authorities don't expect the journalists to stoop this low and stop publishing the reports that go against the government.

Major Hindi newspapers--Dainik Jagran and Hindustan did not publish a single line about this massacre for almost a week. Once the same media hounded Lalu Prasad Yadav. Today it doesn't dare write a line when there are brutal killings in Bihar.

But a section of media that comprises sycophant journalists have taken up the task to ensure that no word against the Nitish Kumar government goes in the press. Are they journalists or 'dalaals' taking up the job to 'manage' and take care of the government's PR.

National Hindi dailies and English newspapers published from Patna are mostly guilty of this cover up. But they forget that in this age, it is impossible to stop a news. Forbesganj killings has become a major issue and it would trouble Bihar government in coming days.

As far as media is concerned, it has once again failed in its primary task. Channels like NDTV, CNN IBN and Times Now have also followed suit. They either ignored the news or deliberately tried to stop this story from reaching the viewers.

This is undoubtedly Indian media's shame. The top guns in Indian journalism and the media houses must answer. If the so-called pillar of Indian democracy is crumbling, can we sit silent and merely watch?
Posted by editor at 3:18 AM

SP Garima Malik ordered the firing and in her presence policemen kicked and lathi-charged residents including women. The role of Araria SP must be inquired.

Such IPS officers who have no respect for law and have no sense of humanity, have to be sacked.