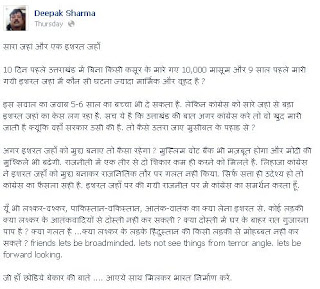 Sharma, who has covered crime [seeking glory by talking to underworld dons in Dubai over phone and in process glorifying them] and police, for years expressed his outrage that how Ishrat Jahan's killing in the 'fake encounter' was getting far more attention than other issues.

The Aajtak journo wrote that in the times of Uttarakhand tragedy, such attention to other cases was unwarranted. Really! He asked lot of questions but shouldn't he, being part of the media, answer it?

Who is focusing more on Ishrat case? Isn't it media? The journalist conveniently forgot that the case of 'a child's custody in Norway' or a 'woman's death because of strict laws against abortion in Ireland' also became big stories.

This is because one story raises an issue that affects thousands or even lakhs. The Ishrat Jahan encounter is not the story of a person or four persons' extra-judicial killing. It is about thousands who are killed by the colluding cops in the same manner from Manipur to Gujarat.

Mostly, the poor are killed and hence the policemen are able to scare off their relatives from raising the issue. Encounters are sometimes for medals. Sometimes, when there is a high crime rate, the police officers decide that an encounter will give them a 'manly image'.

They feel media would show police in positive light for 'wiping out crime'. Journalists are more than willing to publish police version. No one dares to write against police. As the victims are poor, they don't have resources to approach higher courts.

The situation is so bad that journalists know there is no TRP in talking to victims. The poor whose face or plight won't draw viewers on television (they feel so). So everything is hushed up. Ishrat case has become a rallying point because though belonging to a lower middle class family, her relatives are educated.

She was also a bright girl. Now this case has reached higher courts because of the determination of the family and some lawyers and activists. With conviction of criminal cops and IPS officers, the malaise of 'fake encounters' will be checked.

Cops know well who are to be executed--those who have no such background to evoke sympathy, those whose relatives can't fight long legal battle, those who can be threatened and silenced. Who would dare to fight policemen for years?

It is a tendency that journalists working on a 'beat' often lose objectivity and get sympathetic towards the officials of that department, rather than citizens. But senior journalists should desist from it. Journalists' job is to expose the corruption and rot in the system.

They should be the voice of people. In his message, Sharma even went with seeing it as Hindu Vs Muslim, Congress Vs BJP and goes ahead with cheap sarcasm. It is shameful to see so-called senior journalists who have legitimised underworld dons for years, trying to stop wheels of justice from moving.

Sharma writes in the status message that it is a Congress driven investigation. Here he is speaking like a Saffron activist, seeing everything from the world vision of the Sangh Parivar. Does he not know that it is totally a court ordered investigation?

In a way, its good also. It exposes journalists and we are able to see, how humane or inhuman they could be in their attitude. Forget, journalism, many don't even have the basic values of humanism and have probably no understand of democracy, law and justice.
Posted by editor at 4:39 AM